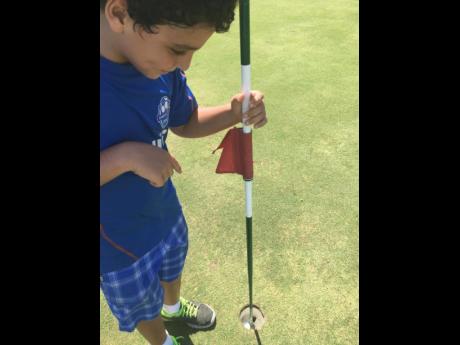 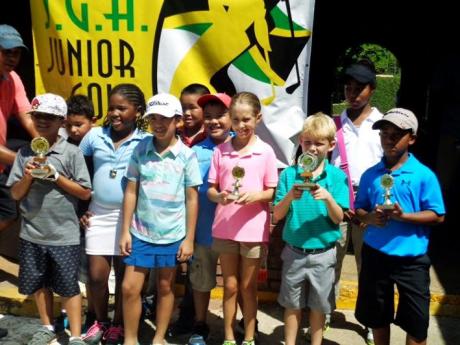 Contributed
Some of the young golfers who competed in the tournament at the Sandals Golf and Country Club in Ocho Rios last weekend.
1
2

Ten-year-old Azan went on to place second in the Under-11 age group.

"It's an incredible achieve-ment to get a hole-in-one in general. Most players go their entire lives without getting one, so this speaks volumes to Noah's ability and dedication to the game as a 10-year-old," his coach, Jason Lopez, said.

The third Jamaica Golf Association (JGA) Junior Series teed off on October 8 with its first match at the Sandals Golf and Country Club in Ocho Rios. Thirty-eight juniors, ages 6-17, are to set to participate in the tournament which involves a series of five matches over five months at five golf courses across the island.

There were other outstanding plays last Saturday. Eight-year-old Lek Drummond made an amazing eagle on hole number nine, hitting a six iron into the hole from 100 yards, going on to shoot an impressive 40 over nine holes to win the Co-ed Intermediate.

First-timer Adrian Barnes won the Beginners with a score of 44.

The lowest score of the day came from boys' Under-13 winner Tristan Brown, who shot 76. Justin Burrowes won the boys' Under-17 with a score of 81, and Sebastian Azan shot 87 to win Co-ed Under-11.

The next match in the JGA Junior Series takes place at Caymanas Golf and Country Club on November 19 and 20.