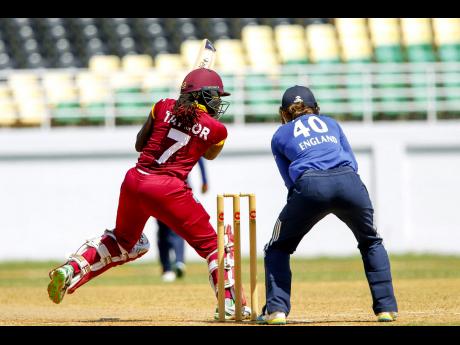 WICB Media Photo
Stafanie Taylor plays square into the offside during the second One-day International between West Indies Women and England Women at the Trelawny Stadium.

West Indies Women and England Women will square off at Sabina Park today in the third game of their five-match one-day international series.

Set for a 9:30 a.m. start, West Indies will enter the contest on a high after winning the second game by 38 runs at the Trelawny Stadium to level the series.

"It was encouraging to see the way we fought back, and if we continue to show that form, I can only see us getting better results."

West Indies, in winning their encounter, had Taylor and batting all-rounder Deandra Dottin to thank and will be hoping the pair can lead the way once again.

Taylor hit a top score of 56, while Dottin supported with 21 in their modest total of 148.

Dottin, bowling medium pace, then claimed four for 19 off 6.4 overs, bowling at the death of the innings.

England will be hoping that the form of left-armer Alex Hartley will continue, as well as opening pacer Katherine Brunt.

Hartley, bowling mostly at the end of the innings, has taken seven wickets so far, while Brunt has picked up five.

The visitors will also be hoping that captain Heather Knight and top batter Natalie Sciver will improve from their leading scores of 27 and 26 in the last fixture.

"We will be looking to go at them very hard as we have been playing some good cricket on the tour so far," Knight said.

"We've got a few little things to tweak and, hopefully, we will do so in this game. We also would like to take the final three games, knowing that if we do, it would qualify us for the World Cup."

The West Indies would also qualify for the World Cup if they win the remaining three matches of the series.