The Wright View | Money well spent; but no statues 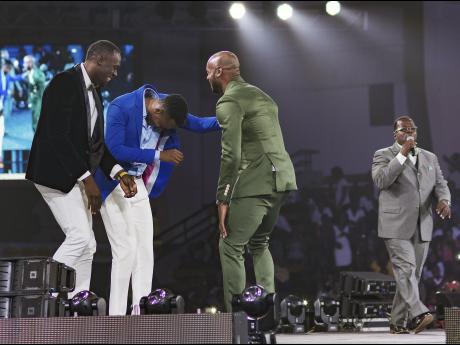 Track and field athletes have been the most successful group of Jamaicans in international competition for over 50 years.

The Olympics and, to a lesser extent, the World Championships, have been broadcast to an expectant nation in great detail and has galvanised support that transcends class and economic circumstance in a way that has never been seen in our fair island.

'Beijing' in Half-Way Tree during the 2008 Olympics revealed the extent of the power of these men and women to affect, in a positive manner the psyche of a nation. We celebrated their victories and cheered and supported them when they lost, highlighting in print and electronic media their struggles, injuries and setbacks.

As a direct result of their exploits, the name JAMAICA took on added significance and attracted visitors and investments that have benefited everyone of us, no matter what we feel about sports in general and athletics in particular. These people are national treasures and we owe them.

The Government committed in excess of J$82 million in showing our nation's appreciation of their accomplishments. Part of this sum was allocated to those men and women who participated in the Summer Olympics and Paralympics in Brazil.

Not only were medallists and finalists rewarded, but most importantly, the non-athletic support group was also rewarded and commended.

No longer will those who went to the Olympics to assist and give their expertise in managing the behind-the-scenes activities - that have resulted in the gamut of emotions that we as a nation have experienced whenever these Games are televised and reported on - be satisfied with a meagre per diem and 'thanks', but they now have cash to show that we care.

The decision to juxtapose these celebrations during National Heroes weekend was indeed a stroke of genius. The celebrations began with a reception hosted by Prime Minister Andrew Holness at Jamaica House and this was followed by the Rio gala and awards ceremony at the National Indoor Sports Centre on Saturday.

The JN 5K Run/Walk - supported by the Usain Bolt Foundation - and another reception at the Braco Melia hotel in western Jamaica allowed as wide a cross section of Jamaicans to be there to show their appreciation.

That is why I believe that the $82 million is money well spent, even though it pales against the $30 million (over three years) pledged by the Minister of Education to assist schools with the expenses surrounding the health and welfare of children at risk during the Inter-Secondary Schools Sports Association (ISSA)-sponsored sporting competitions.

In fact, there are several aspects of life in this island of ours that could well do with $82 million. However, let us not forget that, as a people, we owe these men and women.

The plan to erect four statues - two in 2016 and two in 2017 - commemorating Jamaica's top four sprinters in recent years, does not have my support.

As I understand it, the athletes to be depicted are Usain Bolt, the world's fastest athlete; Shelly-Ann Fraser-Pryce, double Olympic gold medallist; Asafa Powell; and Veronica Campbell-Brown.

Building statues to honour and commemorate our athletes has precedent that never recorded a murmur of discontent from a grateful nation. However, these athletes, who have their likeness recorded on a statue, had long retired and were indeed worthy.

With the current policy of urine and blood samples being kept and subject to retesting over and over again as science catches up with the reported use of banned substances by athletes, erecting statues before retirement is fraught with danger and exercising patience would in no way diminish the effect these statues would have on our people.

The erection of statues by nations to honour citizens in the past has had to be seriously reconsidered when information about the honouree came to light years after the statue was erected.

There will be nothing lost by waiting until our national treasures have retired from active competition. Usain Bolt has already announced his planned retirement in July next year. Let us wait.