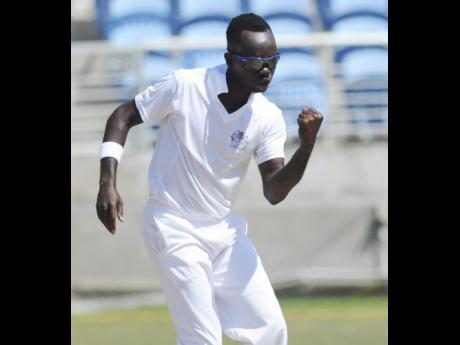 Spinner Nikita Miller has hailed the character shown by the Jamaica Scorpions in their 41 runs win over the Windward Islands Volcanoes in the Digicel WICB Regional Four-day Championship action at Sabina Park yesterday.

Resuming the day on 92 for two for a 38 runs lead, and needing most things to go right, Jamaica were led to victory via a spirited and fighting bowling and fielding display.

This was, however, after their batsmen, almost made victory improbable.

Starting with overnight batsmen John Campbell, not out on 43, and Jermaine Blackwood, not out 16, Jamaica progressed to - at one stage, 121 without further loss, and was eyeing potentially a healthy second innings lead.

However, in the space of 36 runs, they were bowled out for 157. Campbell, who made 32 in the first innings went on to lead all batters with 67, while Blackwood fell for a second-best score of 27.

This left the Windwards with a victory target of 106 runs, but in one of their worse batting displays, they were dismissed for 64 in the post-lunch session.

Leading the way for Jamaica was Miller, who picked up five for 22, a performance, which gave him the Man of the Match award.

Leg-spinner Damion Jacobs, who for the most part bowled in tandem with Miller, also played a part by taking three for 17. The other wicket to fall was accounted for by debutant fast bowler Reynard Leveridge.

Wicketkeeper batsman Sunil Ambis, who was the joint top scorer in the Windwards' first innings did not bat due to an injury.

The win was the Scorpions' first of the season after losing their opener last weekend away to defending champions Guyana Jaguars.

"It was a fighting effort, and I must congratulate the lads," said Miller, who is in his second match as captain. "I am happy that we won the game, and I am happy for the bowlers.

"I am, however, not happy with the batsmen. They need to take it up on themselves and improve, as at this level the type of batting performances we are displaying are not acceptable."

Liam Sebastien, captain of the Windwards, who are now losing their second match in a row, described his team's batting display as atrocious.

"Its inexcusable having to score about 100 runs to win and getting bowled out for 60-odd," he bemoaned. "It's a game that we should have won having put ourselves in a good position to win.

Jamaica will next host Barbados Pride at Sabina Park starting on Friday.

A McCarthy c Sebastien b Edward 1

R Leveridge not out 2