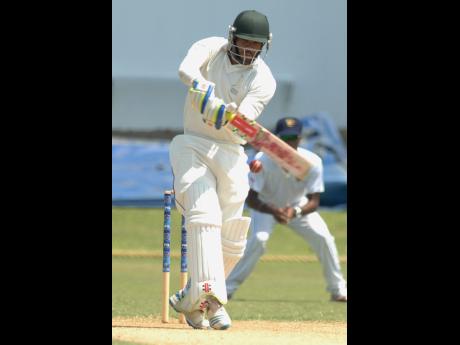 Newly appointed Jamaica Scorpions captain Nikita Miller is calling for better judgement to be exercised by batsmen within the team as they seek to address their batting failures in the ongoing 2016-2017 Digicel WICB Regional Four-day Championship.

Set to contest their third match of the campaign, beginning on Friday at Sabina Park, against early leaders Barbados Pride, the Scorpions, who are currently fifth in the six-team tournament, have so far passed the 200 runs landmark once in four innings.

That was against reigning champions Guyana Jaguars in Guyana in their first innings. The other totals have been 147, 151 and 159.

These below-par performances have also resulted in only two players, opener John Campbell and Jermaine Blackwood, scoring half-centuries with the former scoring two, and the latter once.

The left-handed Campbell hit 71 and one against Guyana before following up with 32 and 67 against the Windward Islands Volcanoes at the weekend at Sabina Park, while West Indies Test representative, Blackwood, after scoring 18 and 96 against the Jaguars, put up three and 27 in the second match.

"We need to be sensible about what we are doing. I don't think we are showing enough common sense in our batting,'' states Miller, who claimed a Man of the Match, five for 22, in the second innings to spearhead Jamaica to a come-from-behind 41 runs over the Volcanoes on Monday.

They lost to the Jaguars by 181 runs in their opener.

"We have as batsmen an aggression naturally because that's how we play naturally, but what you see happening is we are not finding the right kind of blend in terms of attacking or defending.

"It is disappointing, and we need to find that combination very quickly, or else as the season progresses, we are going to falter.''

This could thereby result in a possible change for the Barbados clash with Guyanese-born opener Trevon Griffith with scores of 20, 13, six and 22, a potential candidate for a replacement.

Middle-order batsman Andre McCarthy, fresh from his recent tour with West Indies 'A' away to Sri Lanka, is the other specialist batsman in the team. He has so far amassed totals of 36, two, one and one.

Out-of-favour West Indies wicketkeeper batsman Chadwick Walton has been batting at number six and has so far tallied scores of 14, 13, six and 14.

All-rounder and new recruit, Derval Green, in the two matches so far has effected scores of five, zero, four and two batting at number seven.

"Barbados will be a tougher challenge, and our batters need to recognise this, and do something about it,'' Miller added.