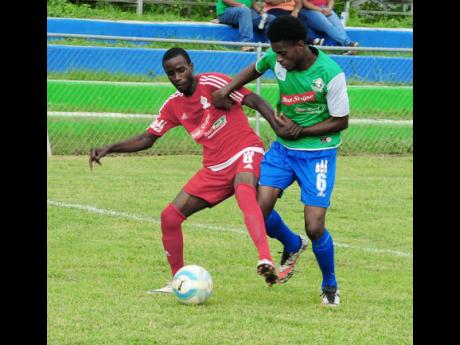 It will be the biggest test of the second round for University of West Indies (UWI) FC when they journey to Wespow Park in Montego Bay to challenge leaders and defending champions Montego Bay United in the Red Stripe Premier League.

The team, which is enjoying only its second year in the competition, is coming off a massive 4-0 win over former champions Portmore United and a 0-1 loss to the promoted Jamalco in its last two matches, which speaks to inconsistency. Additionally, they will be without two of their best players in captain and leading scorer Rochane Smith and their defensive rock Deno Schaffe.

For the onlooker, the above picture looks like a certain struggle for UWI FC, especially with Montego Bay United's deep squad and home advantage. However, UWI FC's coach Marcel Gayle sees things differently.

"I think we got a little bit ahead of ourselves against Jamalco after beating Portmore United. We got complacent and paid the price.

"We put in the work in the past week and we hope that everything falls into place and that we get a favourable result," Gayle added.

Gayle added that while Smith and Schaffe are important members of his group, he will not dwell on their absence.

"Both players are significant members of our unit, but we have a large squad and, for me, their absence is an opportunity for others to step up. Others such as Kemar Cummings, who was a regular starter last season, and the returning Akeem Thenstead are capable. There is also enough experience in the group to provide leadership," he explained.

Montego Bay United, like UWI FC, are coming off a loss in their last game. They lost 1-2 to Humble Lion and required a late goal from Johan Weatherly to see off Maverley-Hughenden in their previous game. Another loss could see them overtaken by their opponents, as well as Tivoli Gardens, both of whom are on 29 points, two below them.

"They have been doing very well and, them being in third position and former leaders, is no fluke. They have ambitions," Orville Powell of Montego Bay United said of UWI FC.

"They came here before that and we won that game. With the ambition that they have, I am sure they are coming with a reversal of that first result or revenge on their mind, so we have to take this game seriously," added Powell.

A win and putting on a good performance for the home fans, Powell said, are very important, and he expects no less. Among the players he will be looking to are the competition's joint leading scorer Dino Williams, Allan Ottey and veteran midfielder Dwayne Ambusley, who recently made his national debut.

Second-placed Tivoli Gardens should be fancied to get the better of 10th-placed Harbour View when the two meet at the Edward Seaga Sports Complex, especially with the return of the rejuvenated Jermaine Johnson, while Portmore United should end their mini slump run with a win over Waterhouse at Prison Oval.

The Jamalco-Boys' Town affair should be a tricky one as, while Jamalco, the home team, are coming off a draw and an away win in their last two games, bottom-of-the-table Boys' Town are showing the kind of fight that have seen them survive when many have written them off. The presence of bright prospect Shamar Nicholson in the Boys' Town team should be a major plus for them.

Home advantage could help Reno clinch a point from their match-up with Humble Lion, while pride should help Arnett Gardens see off Maverley-Hughenden.