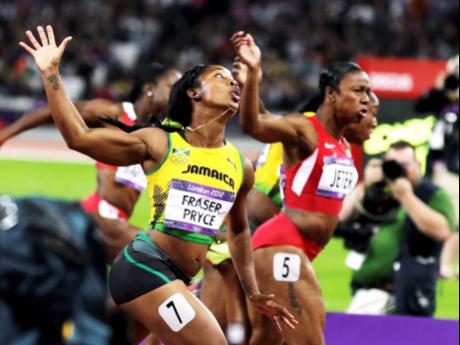 Shelly-Ann Fraser-Pryce, the most successful female 100 metre runner of all-time, has singled out American Carmelita Jeter as her fiercest rival.

Fraser-Pryce described the American as an athlete, who forced her always to be at her best. During the interview with Christian sports website Cross The Line, Fraser-Pryce also spoke of her injury affected Olympic campaign.

Asked to pinpoint her toughest rival, the Jamaican Empress of Speed replied, “I would have to say Carmelita Jeter, over the years, competing with her, whenever she is in the race you know that you must show up.”

Jeter, now 37, had to be persistent in her drive to the forefront of world sprinting. She was third in the 2007 World Championships behind Veronica Campbell-Brown and US teammate Lauren Williams and third again in 2009 behind the Jamaican pair of Fraser-Pryce and Kerron Stewart. Her time to mount the top of the podium came in 2011, when she defeated Campbell-Brown, Kelly-Ann Baptiste of Trinidad and Tobago and Fraser-Pryce at the World Championships in Daegu, South Korea.

She was second when Fraser-Pryce won her second Olympic gold medal in 2012 and won a third World bronze medal in 2013 despite a nagging injury.

“You cannot have a bad race against her because she is a fierce competitor,” Fraser-Pryce explained.

In a response that unveiled her own love of athletic battle, she added, “I like that about her because I know that when I am racing against her, I need to be at my best, when it is time to run she is just focused and ready.”

The sprinter added that her faith in God helped her through a challenging Olympic campaign, which was made particularly difficult due to a toe injury.

“I had been injured so that was very difficult for me leading up to the Olympics but eventually I was able to just let go and know that God is in control,” added Fraser-Pryce.

“In the long run, whatever happened I knew that He would work it all for my good, so going to the Games, I had a peace and was relaxed knowing that I had done everything that I could.”

At the Olympics, she finished third in the 100 metre final, which was won by her training partner Elaine Thompson with Jeter’s compatriot Tori Bowie in second place. The bronze medal pulled Fraser-Pryce ahead of Americans Wyomia Tyus and Gail Devers, who both, like her, won the Olympic 100 metres twice. Neither Tyus nor Devers qualified for a third Olympic final in the 100 metre.

“Getting there was hard, but then actually being there, I was just enjoying the moment," Fraser-Pryce shared.