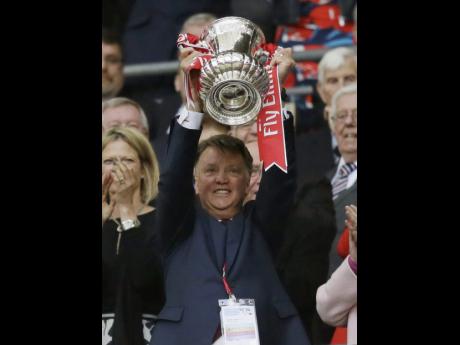 AP
In this Saturday May 21, 2016 file photo, Manchester United’s manager, Louis van Gaal, lifts the trophy after winning the English FA Cup final against Crystal Palace at Wembley Stadium. Two days later, it was reported that Manchester United had fired him.

Within minutes of lifting the FA Cup in May, Louis van Gaal discovered how little the competition factored into the decision on his Manchester United future.

United's approach for Jose Mourinho to succeed Van Gaal emerged as the Dutch coach was facing the media at Wembley Stadium straight after beating Crystal Palace. Two days later, Van Gaal was booted out of United, paying the price for failing to secure Champions League qualification by finishing in the top four.

It's clear what the priority is now for English Premier League owners like the Glazers.

United and the other 19 Premier League teams enter the FA Cup in the third round this weekend, knowing success in football's oldest knockout competition has rarely counted less.

What matters is making cash through the Premier League, which has eroded the FA Cup's long-standing cherished place in the English football calendar over the last two decades.

Van Gaal is one of several managers to leave their jobs despite reaching an FA Cup final. Alan Pardew, his Palace counterpart in May, was fired in December due to the London club's lowly Premier League position.

Going to back to 2013, Manchester City manager Roberto Mancini experienced the same fate as Van Gaal last year. Two days after winning the cup, Mancini was turfed out of his job.

Perhaps the only manager the FA Cup has mattered to in recent years was Arsene Wenger, with successes in 2014 and 2015 easing some of the heat he has faced for Arsenal's failure to win the Premier League since 2004.

Wenger's last cup final victory came against Aston Villa in May 2015. Given that Villa hadn't won a major trophy since the 1996 League Cup or won the FA Cup since 1957, reaching the final was a proud day for manager Tim Sherwood. Five months later, Sherwood was dismissed and he hasn't found another job.

No current manager has more experience of the FA Cup and the debate about its lustre than Wenger, who has spent 21 years at Arsenal.

"I have no special solution," the Frenchman said. "But as well, when April comes and May comes and teams go to Wembley, it's something special ... it's a big priority for us."

Arsenal travel to Preston tomorrow, which is 11th in the 24-team second-tier League Championship. Preston North End's heyday was in the 19th century, winning the top tier twice and the FA Cup once. The northern English club's last major honour was lifting the FA Cup in 1938.

Here is a look at the pick of the third-round fixtures involving Premier League teams against lower-league sides.

United's cup defence begins with a reunion as former defender Jaap Stam returns to Old Trafford. The Dutchman won the cup in United's 1998-99 treble-winning season along with the Premier League and Champions League.

That's because the next time he returns to United he hopes it is because Reading, currently third in the Championship, are back in the Premier League.

Steve Bruce, whose Hull side lost the 2014 final to Arsenal, is midway through his first season at Aston Villa. There's little doubt his main task is returning the team to the Premier League, but it is a place below Preston in 12th place, and seven points from the play-off spots.

Tottenham are likely to use the cup on Sunday as a chance to rest the key players behind the five-match league-winning run, crowned by the victory over Chelsea on Wednesday that lifted Mauricio Pochettino's side to third.