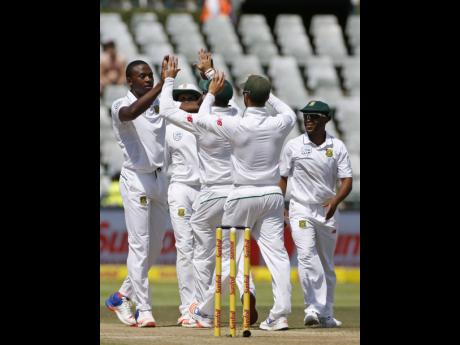 Young pace bowler Kagiso Rabada completed what his captain termed "the perfect performance" by South Africa after his 10-wicket haul for the match bowled them to a 282-run victory over Sri Lanka in the second Test yesterday.

Rabada claimed four of the six wickets South Africa still required for victory on day four to take six for 55 and bowl Sri Lanka out for 224 in their second innings.

In the process, he recorded figures of ten for 92 in the match as South Africa's dominant victory gave them an unassailable 2-0 lead in the three-match series.

"It was pretty much a perfect performance. Everything was planned and everything worked out perfectly," South Africa captain Faf du Plessis said.

Angelo Mathews and Dinesh Chandimal had hinted that Sri Lanka could put up a fight in their second innings by batting out the final hour on day three, but they did not last long after resuming on 130 for four.

Chandimal (30) was the first to go in the sixth over of the day when he chipped Rabada tamely to square leg, before the seamer's next over claimed both Upul Tharanga and Mathews (49).

When Suranga Lakmal edged through to the wicketkeeper soon after, Rabada had his second 10-wicket haul in just his 13th Test.

The 21-year-old was then removed from the attack after a seven-over spell that brought four for 33, leaving Keshav Maharaj and Vernon Philander to grab the final two wickets of the match.

"It's disappointing to repeat the same mistakes over two Test matches," Mathews said.

"You need long hours of concentration against a quality attack like South Africa. They give you a very rare loose ball, and if you try to score runs off the good balls, you end up nicking off to the slips or the keeper."

South Africa had set up the match on the opening two days.

Opener Dean Elgar battled through seam-friendly conditions to score a century as South Africa reached 392 in their first innings, despite losing the toss and being asked to bat first.

Rabada and Philander then took four wickets apiece to bowl Sri Lanka out for just 110, after which the result appeared a formality.

The third and final Test gets under way in Johannesburg on January 12.