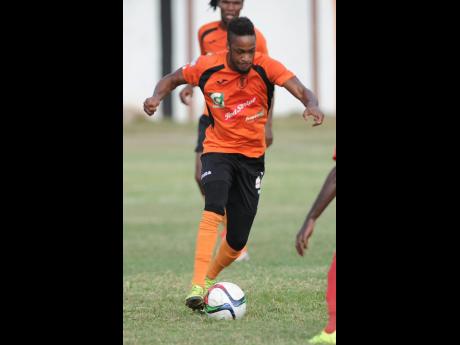 Ricardo Makyn
Junior Flemmings in action during his time with Tivoli Gardens in the Red Stripe Premier League.

This was in their Red Stripe Premier League (RSPL) game at the Edwards Seaga Sports Complex yesterday.

The former Jamaica College Manning Cup captain, who is back home on holidays, starred for the Red Bulls' affiliate team in the just-concluded USL season and, after his impressive debut campaign, has been called up to train with the first team. The highly-rated youth striker is not only confident of making the Red Bulls first team, but he also intends to establish himself as a professional and a senior national player this year.

"So far, my journey (overseas) has been good and in the next couple of weeks, I will know what the interest (from Red Bulls first team) is. So far, it has been very positive with me getting into the first team. It's just for me to go back in these next two to three weeks of preseason and show that I deserve to be in the first team," Flemmings said.

"I am very confident because of the feedback from coach Jesse Marsch, as the thing with Red Bulls is they like players with speed, and that's what I bring to the table. When I get it (ball), I don't hesitate, I go at people and make things happen," he commented.

Even though he is still recovering from a meniscus (knee) injury he got in the summer, he says he is ready to do what it takes to make the next step up.

"I have received some words from them (national coaching staff) and they are looking to bring me into the team as soon as possible, but I am still nursing a knee injury. I think 2017 is the breakout year for me I am going to be 21 in a few weeks and I want it to be a good year and the year to start my profession career," he said.