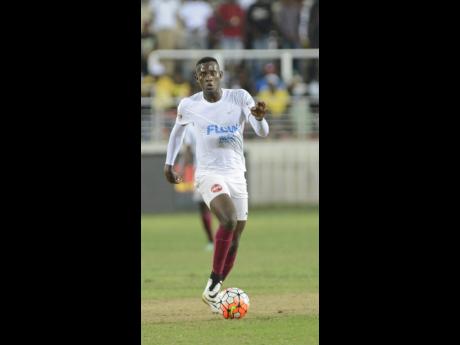 Schoolboy Alphanso Gooden did not look out of place on Sunday as he marked his Red Stripe Premier League (RSPL) debut for Harbour View with the winning goal. This lifted his team to a 1-0 win over fifth-placed Humble Lion.

Though his 68th-minute strike brought joy and three points to the hurting Harbour View fans, the four-time champions remained in 10th place. They sit just below the promoted duo of Maverley-Hughenden and Jamalco, both also on 20 points, but with superior goal differences. Nonetheless, Gooden was a picture of satisfaction.

"It is an excellent feeling playing at the national league level and scoring for the first time in my first game for Harbour View Football Club," the 19-year-old attacker said.

The sturdily built six-footer, who matched up favourably with the Humble Lion defenders, started brightly but appeared to taper off. This was mainly because of a lack of service as his team played catch-up to the more purposeful Humble Lion. However, he said that he never doubted himself.

"Things got a little bit difficult in the middle part, but I did not lose belief in myself. I kept confident, and once you have belief in yourself, you can do anything," said the schoolboy.

Gooden, who led Wolmer's with 20 goals in the recently concluded football season, said the RSPL is a step up, but it is not beyond him.

"It is a different level, but you have to put your mind towards it and get it done. For me, professional football is what I want to do, and I intend to make the most of it here and get a contract internationally. I am not looking to get a college scholarship. It is professional football for me, so this is the starting point," he said confidently.

Gooden said that his immediate task is to provide the goals to get Harbour View into the semi-final round.

"I can help Harbour View get to the semi-final round by scoring some goals because goalscoring is one of the things that the club is lacking at this time. I will support on defending also because we have been conceding a lot of goals, so those are problems that we will have to fix," he said.