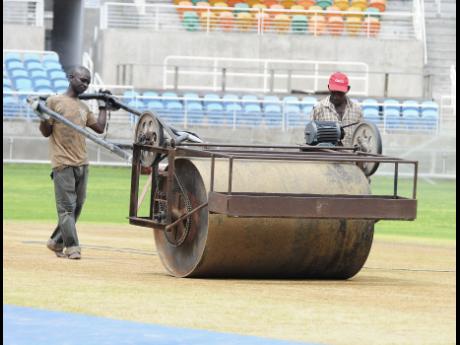 Gladstone Taylor
Groundsmen prepare the Sabina Park pitch with a roller ahead of the start of a cricket match.

Despite weekly wages in the region of $6,000 and very little recognition, local cricket groundsmen are expressing their commitment to the craft, even if there has been a considerable falloff among their ranks in recent years.

Local groundskeepers say that although they face financial challenges, they still remain dedicated to their jobs due to their love for the profession and the sport.

Lucas Cricket Club's Travis Reid, who also plays for the outfit, says that despite the measly returns, he continues to carry out his duties because of love for the sport of the cricket and for his club.

"You have to love the game to be a groundsman because most men who are in it have been in it for years. They have dedicated their time to it," said Reid, who has been curator for the past seven years.

"It is an underpaid job in Jamaica because nobody recognises the work that the groundsmen do," Reid noted. "The main reason why I do it is because of my club Lucas, and so I will continue to do my work here.

"It is only when we have International and first-class matches you will make little money," Reid said.

In fact, Reid said that many curators who have been in the profession before him are now walking away from the craft, because of the limited funds.

"Locally, there is no money in it, and because of this a lot of people are turning away from groundsman work in Jamaica," he said.

Floyd Williams, who has been a curator at the Melbourne Cricket Club for 23 years, said that despite the lack of financial rewards, he, too, remains committed to doing his job to the best of his abilities.

"Cricket is my main sport, and so this why I continue to be a groundsman," said Williams. "The money don't' matter to me because it may be small, but I just love doing my job as a groundsman," Williams said.

Meanwhile, Lucas Cricket Club president Daniel Wilmot, said the lack of financial support at the club is hampering its ability to properly pay its grounds staff.

"The curators, or groundsmen, don't earn that much money, and what they earn is not enough to keep doing that alone. This is partly because the clubs are struggling for money, and only maybe two clubs are doing well, and so they are able to pay their staff.

"However, generally, the clubs are struggling, and this is one of the reasons why cricket as a sport is struggling," Wilmot said.

However, all is not lost as the University of Technology (UTech) is set to stage a curator's course this year in a bid to create new opportunities for those with interest in the field.

Anthony Davis, UTech's director of sports, said that the aim of the course is to improve the standard of Jamaican curators.

"I realise that we really don't have a consistent formal way of training groundsmen because people learnt the trade as a 'prentice', and there is no scientific method of doing it," said Davis.

"Looking around the world, we realise that it is a job in itself and a very distinguished job because if you are a curator in Sydney or Lords or any of the big places in the world, it is a serious job you have, but we don't treat it that way," he said.

He said that the university would be engaging the services of a well-known curator from Durham in the England to conduct the course.