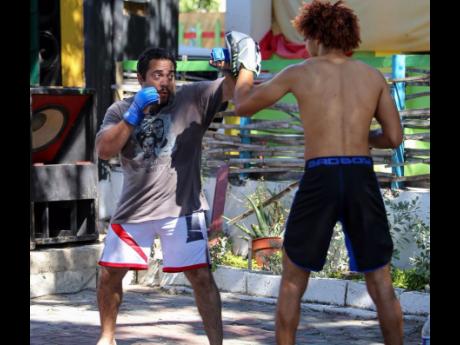 Mixed Martial Arts Jamaica (MMAJ) C.E.O. Daniel Chacko-Wilmot said that the association's recognition by the International Mixed Martial Arts Federation (IMMAF) will help the island to produce more amateur fighters of what he describes as a high standard.

The MMAJ was officially recognised in December by the IMMAF, which is seeking to create regulations to monitor the sport globally. This will ensure that young fighters will get proper training and protection from serious injuries while competing.

Chacko-Wilmot said that international recognition will aid the local body in becoming licensed by the Ministry of Culture, Gender Affairs, Entertainment and Sport.

"They always say to get recognised in Jamaica, you have to actually get recognition from an international federation before you get local recognition," he said. "It's a very important step, because, not only will it help us to get more support nationally from within the sports ministry, but it also opens us up to a lot of experience and knowledge we can gain from the various representatives of the IMMAF. It's gonna open up more doors for our fighters and more opportunities as well."

Chacko-Wilmot, who credits multiple Olympic gold-medal-winning sprinter Usain Bolt for the recognition he has brought to Jamaican athletes in various sporting disciplines worldwide, said it is unfortunate that in Jamaica, especially at the ministerial level, persons are not familiar enough with mixed martial arts, although they know of the sport's most recognisable promotion, the Ultimate Fighting Championships (UFC).

"It all depends, I guess, on how our athletes do abroad as well as when we have local competitions," Chacko-Wilmot said. "I think our success would be what would drive the support from them. Once you're successful in any particular sport, you'll get more attention, so it's really on our athletes to do their best and to perform very well so that they will attract the attention."

In recent times, there have been more mixed martial artists competing in regional and international competitions as fighters such as Robert 'Danger' McCarthy, Kyle Chin, and Jovan Gayle are regulars to the Caribbean Ultimate Fist Fighting Championships in Trinidad and Tobago, while Matthew Colquhoun, Cleon Bardowell, Kaffain Williams, Kasrie Cassells, Uriah Hall and Randy 'Rude Bwoy' Brown all compete in international competitions - Hall and Brown in televised UFC bouts.

However, Chacko-Wilmot said that he wants more events on local shores and as a result, he is looking to create a cage in Jamaica, in order to stage local competitions. He said that doing this will influence local gyms to build their own as doing so is more feasible than shipping one in from overseas. He adds that this will also attract IMMAF officials to the island to train referees and judges, which will increase the number of personnel needed to oversee these competitions he wants to start.