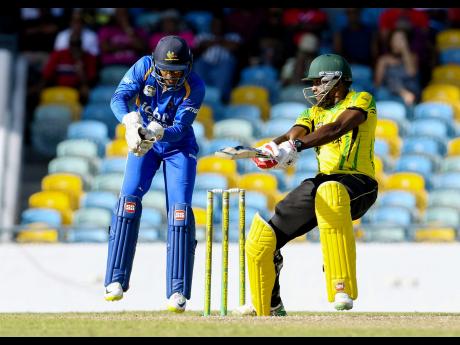 Randy Brooks
Jamaica's Damion Jacobs cutting to the boundary during the Group 'B' match between Barbados Pride and Jamaica Scorpions in the WICB Super50 Tournament on Monday at Kensington Oval. The wicketkeeper is Shane Dowrich.

Jamaica Scorpions leg-spinner Damion Jacobs says he hopes to secure at least another five-wicket haul before the end of the current WICB Regional Super50 in Barbados and Antigua.

The recent West Indies 'A' recruit, who has been the Scorpions' most successful bowler over the past two seasons, claimed five for 25 off 10 overs to claim the Man-of the Match Award against ICC Americas at Three W's Oval on Tuesday.

The haul helped Jamaica win the contest by 67 runs and lifted them to second in Group B behind Barbados. It also allowed Jacobs to pick up his second five-wicket haul in one-dayers in 15 matches.

"It's not easy to get five wickets in a 50-over match when you are only limited to just 10 overs," assessed Jacobs.

"Therefore, to claim my second five-wicket haul in 15 games is a privilege. I am just hoping that I can, at least, get another in this tournament as it would give my career the push."

Jacobs claimed 14 wickets in the Super50 last season, and although Jamaica failed to make it to the he semi-finals, finished second on the bowling charts behind Sulieman Benn, who snared 15 on his way to helping Barbados Pride win the title.

Overall, Jacobs, who has also played lead roles for Jamaica at the regional four-day level, has 30 wickets in one-dayers at an average of 19.10.

"I am just want to be consistent and learn as much as I can, and I'm trying to impress people towards a West Indies series selection, and Caribbean Premier League selection later in the year," expressed the 32-year-old.

''I also want to help win games for Jamaica as it's a good feeling whenever I can contribute.''

The victory propelled Jamaica to a two-win, two-loss record and placed them on nine points behind preseason favourites, Barbados, who have 19 points.

The Guyana Jaguars and Combined Campuses and Colleges Marooners also have nine points, but have an inferior net run to the Scorpions.

Jamaica will next play Combined Campuses and Colleges on Sunday as the return-leg fixtures of the tournament get going.

The two top teams in each group will advance to the semi-finals, which will be contested in Antigua and Barbuda.