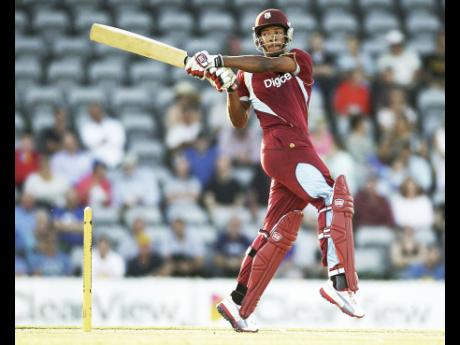 Even after three fine hundreds in five innings in the ongoing Regional Super50, in-form left-hander Kieran Powell has still lamented his lack of "big scores".

The 26-year-old has been on an amazing run of form, hitting 105, 135 and 106 en route to a tournament-leading 429 runs for Leeward Islands Hurricanes but said he would not be totally satisfied until he began to notch more scores in excess of 150.

"I need to get big scores. I got [three] centuries and two of them are just 105 and 106 so we've had talks in the team meetings where when you get in you need to kick on and obviously I got out with 14 overs left so I think I missed the chance to get 150-plus," Powell said following Hurricanes' 105-run victory over English County Kent here on Saturday night.

"Nevertheless, the team managed to get to a respectable total and then the bowlers went and did the job so I'm happy with the overall team performance."

Powell's 106 was the basis of the hosts' 275 for nine at Coolidge Cricket Ground, and it helped them register their fourth win in five outings.

The hundred emphasised the stylish batsman's rich vein of form that has seen him also get 52 in a losing effort against reigning champions Trinidad and Tobago Red Force, and 31 against Kent in the Hurricanes' opener two weeks ago.

Powell, who is returning to regional cricket this season in earnest following a two-year break from the game, said he was still high motivated despite his abundance of runs so early in the tournament.

"Personally, I wake up every day thinking I haven't scored a run for the tournament yet so that's why I go out and bat each game with a big appetite to try ... and get some big runs on the board because I can't rest on my laurels and think 'I've got this amount of runs' and be complacent at any point in time," said Powell, who has played 21 Tests and 28 One-Day Internationals.