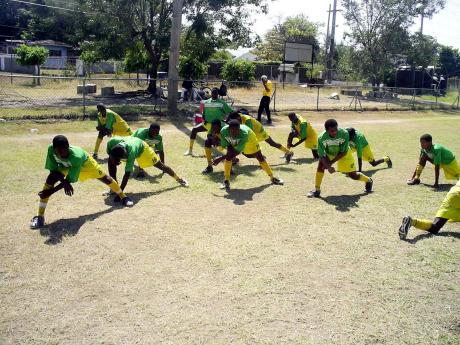 Contributed
Members of Jamaica’s Under-17 team going through their paces in a recent training session. 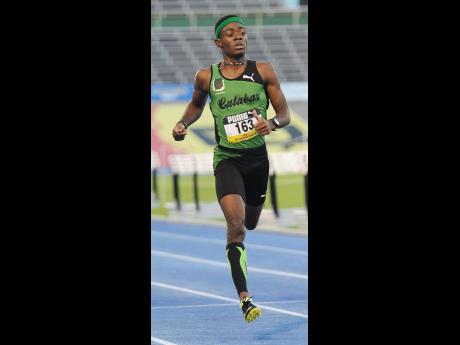 By its very nature, sport is structured so that winning is the goal, the reason for playing. It is said that in youth sport, the effort to prepare and the desire to compete should take precedence over a comparative score. Children should be taught that the 'score' at the end is not the best indicator of success. At every level of sports in schools, children face both winning and losing. How we teach them to deal with both will determine their continued improvement, develop their humility, and provide them with the ability to see that there is more to life than 'winning'. Unfortunately, school sports in Jamaica, has been reduced to winning at all costs, which has led to the ultimately defeatist practice of 'recruiting'. Recruiting in Jamaican schools is done very simply: to win. This practice is recognised by the authorities as 'bad', and rules are constantly being introduced and modified in an effort to stop this practice. However, recruiting continues as brand-name schools constantly raid smaller and not-so-well-known institutions of learning, removing any child with a particular sporting talent, 'to improve their chances of becoming champions.' This philosophy blithely ignores the many instances of children from so-called 'no-name' schools completing their sporting career at those schools and going on to becoming national champions. One of the dangers of recruiting is the concentration on the child's particular athletic skill, to the detriment of their educational well-being, considering that the whole purpose of school is to prepare our children for life in the adult world with all its ups and downs. What is needed is a comprehensive review of the life after school of children who had changed schools for mainly sport reasons. Did they become sport stars who made an impact in the sport of their choice, either here or abroad? Or are they now struggling to make ends meet, while ruing the choice made for them as children by coaches and past students? As one of those who believe that recruiting for sport purposes is just wrong, I am not alone in submitting an alternative. That alternative is sport academies! These institutions would be where children with proven skill/talent for a particular sport would be admitted and have their talent/skill honed and improved, while getting lessons in the three 'Rs' reading, (w)riting, and (a)rithmetic.

Head coach of the Under-17 Reggae Boyz, Andrew Edwards, has announced that his 'pet' request has finally been granted: A 32-player residential camp, which will ensure that the boys in this camp will have a full range of activities including, "training sessions, gym training, mental-skills training, social activities, team-building activities, and full academic tutelage of the players". This is an excellent idea, and my information is that the parents of these boys are in full agreement with this arrangement. As more and more corporate bodies are moving into the sponsorship of children sports, it is my hope that some of the cash and kind being put up for winning could be diverted into building and developing sport academies, where not only footballers with skill and talent will be housed and taught 'life skills' as outlined in the Under-17 Reggae Boyz experiment. Can you imagine track and field, Cricket, netball, and swimming academies springing up across the island, where our best-of-the-best children could be prepared for international competition and exposure? The main obstacle with my suggestion is the 'fact' that in the present culture of school sports and competition, no brand-name school would allow any of their stars to be 'recruited' to such an academy, potentially denying the affected school the possibility of the child representing them in competitions. The year 2017 has begun with a concerted effort from the Inter-Secondary Schools Sports Association (ISSA) to regain control of school sports from coaches and past students! Let us hope that this new-found determination to protect the future of our children remains the main focus of ISSA and that, in conjunction with corporate giants of industry, sport academies can become a reality.