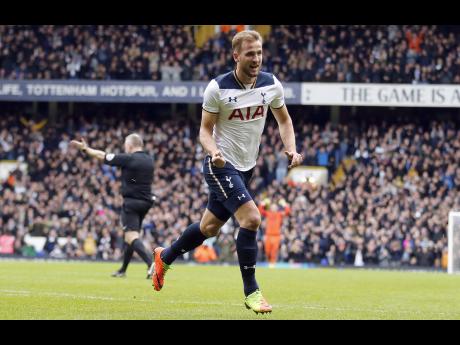 Kane reached 100 career goals at club level with his opener as he delivered a spectacular treble within 37 minutes, before setting up Dele Alli to give Spurs a 4-0 half-time lead.

It was the perfect way for Mauricio Pochettino's side to get their Premier League campaign back on track after its turbulent February, which saw defeat to domestic rivals Liverpool followed by a surprise Europa League exit at the hands of Belgian side Genk.

Kane's landmark strike came in the 14th as he took advantage of Ryan Shawcross' failure to clear, sending the ball across goal with power and precision from the right side of the box.

Despite the final score, Hugo Lloris produced one of the game's most crucial moments in the 23rd to preserve his side's lead. The French goalkeeper repelled Peter Crouch's effort at point-blank range after the former Spurs striker met Erik Pieters' cross.

Warning heeded, Tottenham did not look back.

Jan Vertonghen struck the crossbar with a rising right-footed effort before Kane came within inches of adding his second with a powerful strike from outside the box.

The England forward scored the pick of his goals in the 32nd as he met Christian Eriksen's corner with a wonderfully controlled left-foot volley.

There was some fortune involved when Kane completed his hat trick five minutes later from a set piece. His low strike took a significant deflection off the Stoke wall, wrong-footing goalkeeper Lee Grant and creeping into the bottom corner.

The prolific Kane, who has now scored 13 goals in his last 11 games for Tottenham, then showed the other side of his game as he set up Alli in first-half stoppage time.

Having received the ball just inside the Stoke half, Kane flicked the ball over Bruno Martins Indi and surged into the penalty area before centring for Alli, who made no mistake finishing high into the net.

Stoke did manage to regain some pride after the break, as Mark Hughes' side prevented Tottenham from adding to its first-half haul. Grant saved well from Eric Dier and the still goal-hungry Kane.