Under-17 Boyz held by Cuba 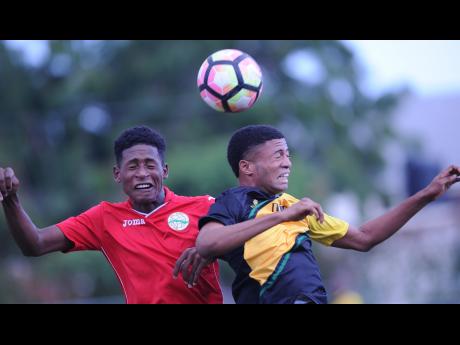 Ricardo Makyn
Cuba's Cristofer Llorente goes up for a header with Jamaica's Nickque Daley in their encounter at Winchester Park yesterday. 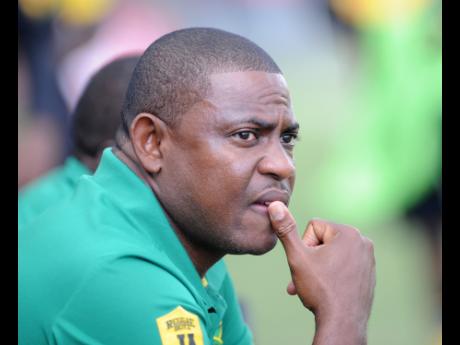 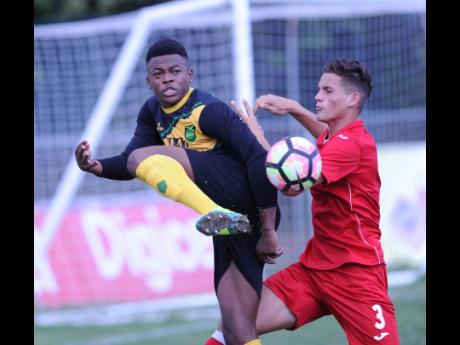 Ricardo Makyn
Jamaica's Raewin Senior attempts to control the Ball under pressure from Cuba's Miguel Cali in their encounter at Winchester Park yesterday.
1
2
3

Jamaica's under-17 men's football team had to settle for a 1-1 draw with Cuba in the first of their two friendlies at Winchester Park yesterday. Ribaldo Roldan put Cuba ahead from the penalty spot eight minutes into the second half, but Ricardo McIntosh cancelled that effort with a composed finish on 70 minutes.

In what was a fairly competitive contest, the young Boyz were clearly the better team over the 90 minutes and had more and better chances to win the game.

Coach Andrew Edwards was pleased with the number of chances the team created but thought their decision making and finishing needs more work if they are to advance from their group of death, which consists of USA, Mexico, and El Salvador in the CONCACAF final round.

"I have mixed feelings about the game," Edwards said. "In the first period, we had problems coming out of the back. We were not smooth and fluid as the defenders were not having good connection with the midfielders to ensure a smooth transition into the attacking third.

"But we created nine chances in the first period and put away zero, and that is a major cause for concern. It doesn't matter how good an opponent is, if you are creating chances and put away these chances, you are going to increase your confidence. But our decision making was not at the level we expect," he continued.

However, he says that creating chances is a positive, and they will have to improve on that for the next game on Tuesday.

"The positive is that we created that many chances and it is something we can work on. Creating the chances and having persons in the position to score is a good sign, and we want to continue building on that," he added.

The Boyz started shakily but came into their own after 15 minutes and had excellent chances, the best of which fell to Treyvonne Reid, Nickque Daley, and Kaheem Parris. Cuba also had a couple good opportunities, but good defending kept them at bay.

Early in the second half, a mix-up in defence resulted in a Cuban player being brought down in the box, and Rodan netted the spot kick to put the Cubans in front.

However, after wasting a number of great opportunities in the second half, they eventually got the equaliser when the ball fell to McIntosh, who calmly slotted past the excellent Danny Eduardo in goal.

"We expected a tough game. Both teams had control of the ball at different intervals. They both got chances, so the 1-1 score is a good result for both teams," said Cuba coach Rufino Sotolongo.