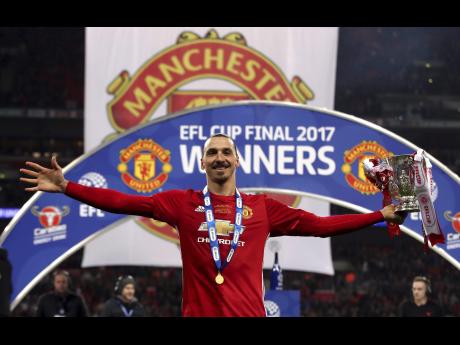 Zlatan Ibrahimovic powered in a late header to win the English League Cup for Manchester United on Sunday, sealing a 3-2 victory over Southampton after a two-goal lead was thrown away by Jose Mourinho's side.

It was Ibrahimovic's second goal in the final after putting United ahead from a free kick, taking the 35-year-old Swede's tally to 26 goals in an incredible first season at United, where his performances have more than lived up to the swagger.

That bravado was flaunted on the Wembley Stadium pitch amid the celebrations.

Asked by a television reporter if something special was unfolding at United, Ibrahimovic replied: "I came. That's special."

The free summer transfer window recruit ensured Mourinho became the first manager in United's history to win a trophy in his first season, adding to his three League Cup triumphs with Chelsea.

"(It) is quite a sense of relief," Mourinho said.

United's fragile defense, though, nearly contrived to throw away the chance of glory. Although Jesse Lingard extended United's lead in the 38th minute, Southampton fought back with goals either side of half-time from Manolo Gabbiadini. But as Southampton pushed for its first major trophy since beating United in the 1976 FA Cup trophy, Ibrahimovic produced the bullet header in the 87th minute from Ander Herrera's cross.

Now Ibrahimovic has won a major trophy in a fifth country after honours in France, Italy, Spain and the Netherlands.

Although Wayne Rooney went up to collect the trophy as captain, that was his only role at Wembley. The 31-year-old forward was forced to watch from the bench as his older teammate produced an ageless, match-winning contribution.

"This is what I came for. I came to win, and I am winning," Ibrahimovic said. "I have to keep going because the more I win, the more satisfied I get."

The striker didn't cost United any transfer fee when he joined in the summer transfer window as a free agent after leaving Paris Saint-Germain. He sought another final challenge, even in the twilight of his career, rather than an easy payday in an inferior league.

"You appreciate winning more the older you get. It's all about winning and collecting trophies," he said. "This is my 32nd trophy. Wherever I have been, I have won."