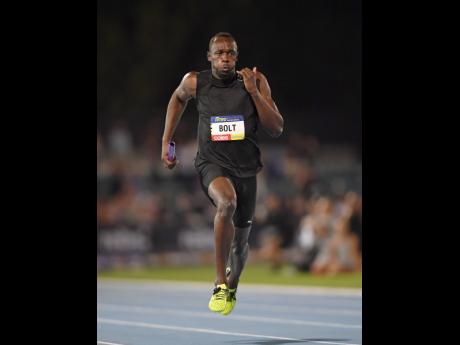 Iconic Jamaican sprinter Usain Bolt has indicated that it will be an "emotional" affair when he makes his final appearance locally, at his club's second annual Racers Grand Prix, at the National Stadium on Saturday, June 10.

The towering sprinter, whom many consider the greatest of all time, is expected to bow out of the sport before legions of local and international fans at the same venue he began his sterling World Juniors career.

It will be the 30-year-old's last competitive race in Jamaica, just months ahead of his international farewell at the IAAF World Championships, this August in London.

Bolt said he is always putting in the training and will be ready to remain unbeaten, as he hangs up his running shoes.

"For me, it's the last time competing in Jamaica, and it's gonna be a big moment. It might be a little bit emotional, but I am looking forward to it," he told The Gleaner.

"It's a big meet for me because it is my coach's (Glen Mills) meet, so I am always excited to be a part of what my coach is trying to do," he continued.

Bolt was clear, however, that he will always miss athletics.

"Always, always gonna miss athletics, for sure," he confirmed.

He was speaking at the Digicel Grand Prix at the National Stadium last Saturday, where he represented telecommunications sponsors Digicel.

Bolt, 30, is a triple world record holder in the 100m, 200m and the 4x100m relay, and has remained unbeaten in his career, while helping to maintain Jamaica's dominance as the sprint capital of the world over successive Olympics and World Championships.

He remains confident of ending unbeaten.

Bolt, meanwhile, has ruled out next month's World Relays in The Bahamas.

"No, my coach hasn't said that's on the cards, so I guess not. I am just gonna train and we will see what happens, right now," he pointed out.