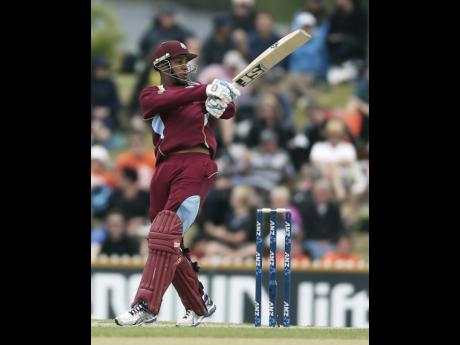 He holds a big reputation, and he's more than aware that he has big shoes to fill.

Stylish West Indies batsman Lendl Simmons is eager to get his new Caribbean Premier League (CPL) Twenty20 experience going after he was recruited at the number-one spot by defending champions the Jamaica Tallawahs, at the draft in Barbados on Friday.

Simmons, who last represented the St Kitts and Nevis Patriots, will arrive in Kingston as a direct replacement for swashbuckling megastar Chris Gayle, who announced in December that he was heading in the opposite direction.

"I'm ready to show my worth, I know what I am capable of, I know how destructive, I can be at the top of the order, and I am just really looking forward to playing with the Tallawahs," Simmons told The Gleaner in an interview yesterday.

"Before the draft, my agent was telling me that he spoke to them (Tallawahs management), but that they wanted an all-rounder so I didn't really know that this would have been the outcome, but I am looking forward to it," Simmons added.

The 32-year-old Trinidadian has established himself around the region as one of the most talented cricketers from the Caribbean and also has international T20 experience with the Mumbai Indians in the Indian Premier League and the Karachi Kings in the Pakistan Super League.

"Chris Gayle's shoes is a big one to fill but every batsman has his own s,tyle of batting, and my style is not the same as Chris Gayle's, but I do know how to accumulate my runs and set up my innings, and every batsman has their own plan," Simmons said. "When you go in the top bracket (of the draft) for $160,000 a lot will be expected of you, and I know a lot will depend on me at the top of the order, and that's what I am prepared to give."

"I'm looking to be in the top three in terms of aggregate runs. For the past four years that I have played the CPL, I was in the top four at all times besides when I had that injury and

didn't perform as well as I wanted to. But now I am up to full fitness and I have the IPL to play before, so once I get my form going and come into the CPL and perform for the Tallawahs like I have been doing for the past four years or so in the competition, I will be pleased," added Simmons.

The batsman is confident the team can repeat as champions this year and expressed confidence in the abilities of youngster Rovman Powell.

"I think we have a very good team. Not having (Andre) Russell is a very big blow; I think he plays a vital role in the Tallawahs team, being able to go out there and get quick runs and giving you outfield ability to catch and save runs. Rovman Powell, I guess, looks up to Russell and can do almost the same things, so hopefully, he can emulate what Russell does and follow in his footsteps."

Simmons finished second among CPL batsmen in 2013 before ending with the most runs a year later and capping his performance with the MVP award, while leading the Amazon Warriors to back-to-back finals. He finished with the fourth most runs in 2015.