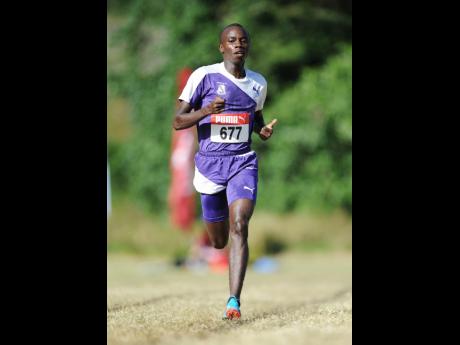 Ricardo Makyn
Ari Rodgers of Kingston College winning the 1500m at the Puma/JAAA Development meet at Kirkvine in Manchester earlier this season.

The uproar over the decision to allow Aryamanya Rodgers to run for Kingston College at the ISSA/GraceKennedy Boys and Girls' Championships is understandable. By itself, the decision is a compassionate choice. Placed in the context of consistent disqualifications due to lateness for various reasons, it appears to run contrary to the tenor of recent policy.

Those stung in the past by disqualification from Champs due to lateness will feel duty-bound to make queries. In their eyes, it won't make a difference that Rogers and his connections appear to have made every effort to get through delays they experienced in getting the travel clearances needed to come from Uganda to Jamaica in time for the start of school. They instead, perceive a softer response to lateness in this case.

In some cases, entire teams have been barred from Champs for entrants submitted past the deadline. In others, incomplete entries have left, student athletes outside Boys and Girls Championships looking in. In all cases, there is compassion for those who trained for months only to be punished by the mistakes of someone else.

Vere Technical High School missed Girls' Championships in 1976 for this reason when a hat-trick of wins might have been in sight. When Garvey Maceo High School was late with its entry in 2011, the leading Class One 400m runner was no other than Rusheen McDonald, who now holds the national record at 43.93 seconds. Yet, those aren't the worst cases of dislocation by late entry. Even though high schools do the Champs entry every year, many student athletes have to swallow a harder pill. They must watch their own schools compete at the best high- school track meet in the world without them.

The current uproar is probably also fuelled by the knowledge that Rodgers is the favourite in the Class Two 1500m and the Open 5000m. On January 7, he ran 15 minutes 26.96 seconds for the longer race on the 300m grass track at Jamaica College. Projections are that he could run well as fast as 14 minutes and 30 seconds at Champs on the 400m oval inside the National Stadium. The Champs all-time performance list has just one name with a 5000m time better than that - record holder Kemoy Campbell!

Rogers is also favoured in the Class Two 1500m.

At nine points per gold medal, the lad could be the difference between winning Champs and losing. Those who oppose his eligibility do so in part because they think the ruling is unfair, and also because of the value of those 18 points.

The other irritant may well be the recent ruling on the number of events one athlete can do at Champs. This rule has faultless intentions, but many coaches still seem to feel that it was implemented without due consultation. That discomfort probably lingers.

Calm is needed. Once they are appraised of the reason for this ruling to run against the tenor of previous decisions, the aggrieved might be placated. Perhaps then, things will settle down.