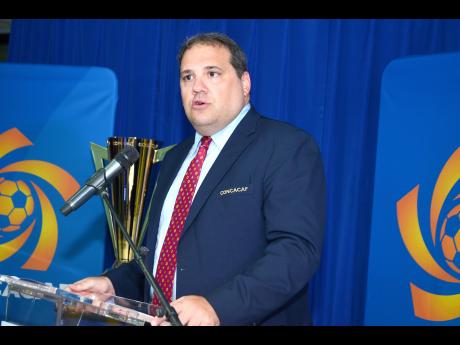 Confederation of North, Central America and Caribbean Association Football (CONCACAF) president Victor Montagliani says the Gold Cup tournament will be expanded from 12 to 16 teams in its 2019 edition.

The competition, which started in 1991, currently has a format of 12 teams in three groups of four, but the confederation believes that the tournament can only be strengthened by including more teams to increase the number of games.

"That will expand in 2019. That's the plan right now," Montagliani said. "That will increase the number of participants from the Caribbean and also Central America. We haven't finalised what the platform will look like in terms of qualification, but, obviously, it's a step forward as we've seen. Look at this year. you have two new countries - CuraÁao and French Guiana. You've got Martinique. Trinidad's not in it, but they're in the World Cup Qualifying Hex. The quality is there to go to 16. there's no doubt."

The Canadian also spoke about a new tournament to be launched called the Nations League, but said it is still a work in progress.

"We're looking to establish a league of nations, where we have some consistency for our countries, where they can play on a more consistent basis," Montagliani said.

He added: "A lot of countries struggle getting friendlies, getting competitions. We've got some of our national teams, whether it be in the Caribbean or Central America or even in North America, like with Canada, where rather than playing 40 games in a four-ear period, which is every FIFA date, they play like single digits or 10. You're not gonna grow or develop that way, so this League of Nations concept is for everyone to play on a consistent basis and keep the dream alive to qualify for things like a Gold Cup or obviously a World Cup."

"That won't happen. Can CONCACAF AND CONMEBOL work on things together? Other tournaments and stuff like that? Absolutely! We are two specific confederations and so we'll have our World Cup qualification and they'll have theirs," he concluded.