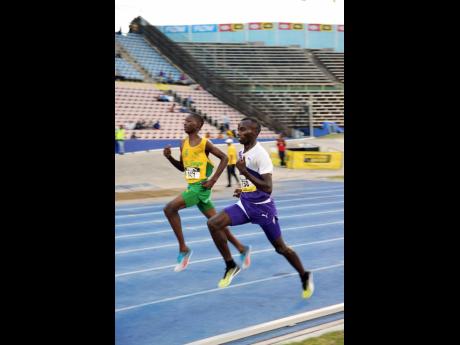 Gladstone Taylor
Aryamanya Rodgers (right) of Kingston College wins the preliminary round of the boys 5000m open ahead of Renardo Johnson of St Jago High School on day two of the ISSA/GraceKennedy Boys and Girls Athletics Championships at the National Stadium yesterday.

KC, who are aiming to win the boys' title for the first time since 2009, captured two gold medals on yesterday's second day of competition at the National Stadium.

The Purples lead the way with 27 points after two finals, with Jamaica College next best on 12. Defending champs Calabar are on 11, while Green Island, St Jago and Wolmer's Boys are on 7 each.

Green Island's David Tomlinson was second with a mark of 6.86m, while Jamaica College's Jowayne Harrison was third with a leap of 6.76m.

The 15-year-old Lowe said he was happy with his performance despite his poor execution of the event.

"I am very grateful that I won the first gold medal at the Champs this year," said Lowe.

"My execution was not very good because I didn't follow some instructions as my drive was too long and the middle part of the run up wasn't correct," he said.

KC completed the double when Carey McLeod, the Class One long jumper leaped to a best mark of 7.72m. Wolmer's Dameon Creary was second in the event with a leap of 7.31m, while third went to Rashaun Dawkins of St Jago with 7.24m.

KC's Ugandan athlete Arymanya Rodgers opened his account at the championships when he easily won his heat in the boys Class Two 800m in 4:03.79 to advance to the final.

Rodgers' rival Kimar Farquharson of Calabar, who broke the 800m record in the heat on Tuesday's opening day, also advanced to the final after finishing third in 4:08.14.

Petersfield's Kevin Nedrick, who broke the national junior record in the boys' Javelin on Tuesday, advance to the final of the boys' discus with a throw of 53.73m.

Calabar's Christopher Taylor advanced to Friday's semi finals of the boys Class One 400m after winning his heat in 48.42.

Earlier, Taylor's teammate Evaldo Whitehorne clocked an impressive 47.55 to advance to the semi finals of the boys Class Two 400m.

Zidane Brown from Glenmuir, 49.01, Petersfield's Antonio Watson, 49.05, and Kobe Simpson from Manchester, 49.14, were the other leading qualifiers.