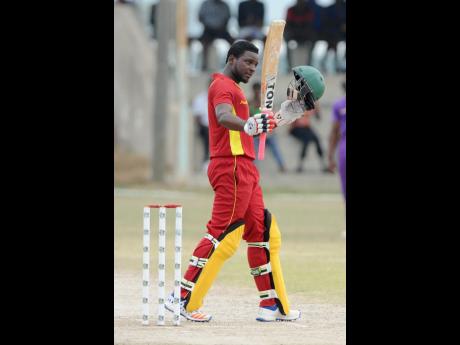 The Jamaica Scorpions will seek to keep alive their slim hopes of winning the Digicel-WICB Regional Four-day Tournament when they meet mid-table contenders, the Windward Islands Volcanoes, in St Vincent starting today.

The Scorpions, third in the standings on 95.2 points, trail leaders and back-to-back defending champions, the Guyana Jaguars, by 14.6 points, and second-place Barbados Pride by four.

This is with two rounds of matches to go and with Guyana and Barbados having the luxury of playing their final two fixtures at home.

Guyana, starting this weekend, will host the Leeward Islands Hurricanes, and next week, the Volcanoes. Barbados are down to play Trinidad and Tobago Red Force this weekend, and the Scorpions next weekend.

"Winning against the Red Force in the last game was a welcome boost, and though our chances are slim, we have to give it our best shot," states Scorpions coach Robert Samuels.

Changes have been made to the 13-man squad, some forced and one due to a lack of form.

Andre McCarthy has been dropped because of poor form while Brandon King got injured in Trinidad and had to sit out. Leg-spinner Damion Jacobs is unavailable while Chadwick Walton and Rovman Powell are with the West Indies one-day team. Left-arm wrist spinner Dennis Bulli and young batsmen Oraine Williams and Peat Salmon have come into the squad.

The Windwards, who are out of the title race, have made two changes to their outfit, which defeated neighbours Leeward Islands Hurricanes two weeks ago. The experienced batsman, AndrÈ Fletcher, and left-arm spinner Larry Edwards have replaced West Indies Under-19 batsman Roland Cato and the uncapped Gian Benjamin.