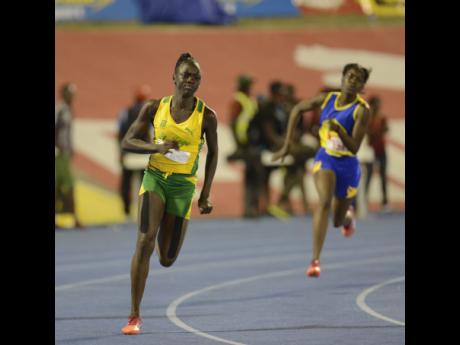 There is a crucial question that, not for the first time, is being asked after another successful staging of the ISSA/GraceKennedy Boys & Girls' Athletics Championships. Inevitably, it concerns the plethora of talent that continues to flow from the five-day showcase of the country's best in that age cohort. What needs to be addressed and answered should be palpably clear to all who understand and appreciate the sport. How will Jamaica respond to the further developmental requirements of the young male and female athletes who came to the National Stadium, and guided by coaches and team officials of optimal quality, delivered the goods in such outstanding fashion?

Foster's Fairplay has long yearned for a system that could provide the environment and material necessary to afford the stars of Champs the opportunity to enhance the gifts with which they have been undoubtedly blessed. Take a look at the lower classes. The two little babies - how else can they be appropriately described? - Brianna Lyston and Kevona Davis of St Jago High and Edwin Allen, respectively, put on sprinting displays that sent those privileged to be there into sheer ecstasy. Vere Technical's sprint hurdler, Brittany Anderson; and Sachin Dennis of St Elizabeth Technical were no less awesome in the execution of their events. There were others who one hopes will form the nucleus of a wealth of talent that will keep the nation's flag aloft internationally for years to come. Any lover of the sport who believes that this will happen automatically had better think again.

There has been talent before, and many have hit a brick wall and stopped in their tracks, failing to achieve their true potential. This has been so as there was an absence of the nurturing that would encourage excellence in any given discipline. A formula has to be found and developed to take care of the limiting deficiencies and deprivations that currently exist. Maybe, one day, some bright individual will come up with the reason our sports performers are invariably from the country's socially and economically disadvantaged sector. Until that is reversed, it is the duty of a caring nation to ensure that lack of resources is not a hindrance to the advancement of those who give us the inestimable joy and satisfaction that the athletes bring to us.

HELP NEEDED TO BRING ABOUT OUTCOMES

What the country witnessed at the National Stadium two weekends ago had its genesis in the work of some special and select individuals. Coaches, some school officials, parents, guardians, and volunteers have worked and sacrificed for a long time to bring about solid achievements for their charges - these young athletes. In their turn, the youngsters have performed out of their skins to bring honour and recognition not only to their community, but to the country. There are more educational and financial outcomes that can emanate from all this, and they should not be left to do it all alone.

This is where the Government should step in. Being present, occupying the best seats in the park, to applaud, revel in the spectacle, and hand out a few awards are commendable efforts. Those actions and activities show that there is interest. However, a lot more is expected. Can there not be a think tank bringing in some of those who have toiled and contributed to the athletes' efforts over time, and where giving them more support is discussed and a way forward is identified? Would it not be justice for these athletes if they were afforded an easier passage away from the neglect and abuse of their talent that some of them are forced to endure?

These youngsters are giving to the nation a lot more than the compensation that they are receiving. As the great one, Herb McKenley of blessed memory always said about athletes, "What they need is a sense of belonging to something." The country should join with them in the struggle to achieve their full potential and for them to feel good about their efforts in pushing their country's image to greater heights. Isn't this what these youngsters are doing for the nation? So why can't Jamaicans join hands and do the same for them?

Let it start with our leaders.