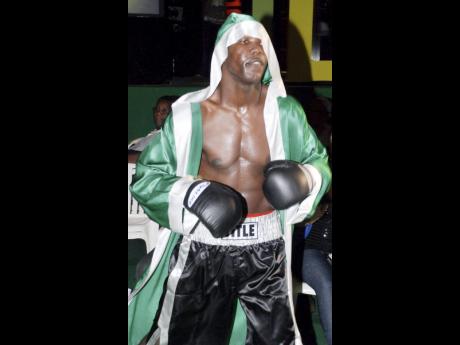 Jamaica's Ricardo Planter makes his third try for the Wray & Nephew Contender title when he takes on Canadian Phil Rose, in the second contest of the 2017 junior middleweight series, which continues tonight at the Chinese Benevolent Association auditorium on Old Hope Road in St Andrew.

The action starts at 8:30 p.m. with two amateur bouts, followed by the main contest over five rounds at 9:30, which will be broadcast live by Television Jamaica. Jamaica's Sakima Mullings defeated Canada's Winston Matthews on points in the first round of the competition.

Planter, who has a 6-8-2 record, will face a stiff challenge from an opponent who boasts a 6-4 record and said yesterday that his mission when he entered the series was to win the title and the $2-million.

"Two things fascinated me about the Contender series," he told The Gleaner yesterday. " First is the prize money, which I can use, and second, the venue is Jamaica, the birthplace of my parents, Phillip and Claudette Rose. I was born in Canada, and I have never been to the place they call home, so this is a great opportunity for me.

"In addition, I will have a lot of family from Red Hills cheering for me," he added. "I have been reaching out to uncles and aunts and cousins since I came in over the weekend, and I know that they are anxious to see Pablo and Paulette's son perform."

Those are the names that his parents are known by in family circles, he volunteered.

Describing his style as "upbeat", he said that he never underestimates an opponent, and tries to fashion his tactics to what his opponent brings to the table. He said that he has looked at tapes of Planter in action, and has worked out a plan for victory with his trainer Don Nelson.

"I will take a good look at him in the first round and then take it from there," he said. In his last fight in November, Rose stopped Ryan Young, who is on the Canadian team to Jamaica, in the first around.

"I am ready for action," he declared.

Planter was in a subdued mood when he spoke with The Gleaner.

"I have worked hard for this contest as I want it to be my most successful. I have been there twice, and this time I am aiming for the final," he stated.

Commenting on his opponent, he said that he has looked at tapes. "The first thing that struck me is that he is a big guy. He will have size over me, but I will counter that with my speed," Planter said.

This promises to be an evenly matched encounter, and there should be plenty of action from round one.