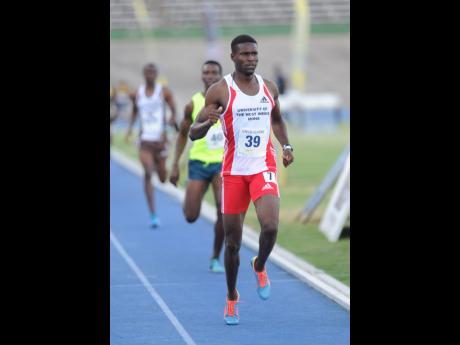 Jowayne Hibbert, Jamaica's reigning 800 metre champion, is trying something new. Hibbert is experimenting with the 400 metres hurdles this season, and the early results have encouraged him.

The former Kingston College athlete says his 800m strength is an asset to him in his new venture.

"My coach, Mr Fitz Coleman, and I sat down and we thought about giving the 400 metre hurdles a chance this season," Hibbert said during last week's Inter-Collegiate Track and Field Championships.

His two attempts at the event have yielded times of 52.33 and 51.99 seconds respectively.

"It's been going good so far," he said. "I'm catching the technique," he assessed. "I already have the strength and I have the basic speed for it," Hibbert listed, "So it only gets better from here."

Those events are scheduled for May and June in the weeks leading up to the National Senior Championships.

"The 400 hurdles is the main focus for this season," said the former University of the West Indies star, "but the 800m is still in the mix." Asked what event was his priority, he responded: "If I may say, I do prefer running the hurdles than the 800m right now."

Noting respectfully that Jamaica's top 400m hurdlers now include Olympic finalist Annsert Whyte and two-time World Junior champion Jaheel Hyde, he said: "I have something that they don't have, 1.47 going 800."

"We're all in the mix going 400m which is 46-mid so right now," he continued. "It's just for me to perfect the technique and I'll be right there with them."

Hibbert's foray into the 400m hurdles continues this Saturday at the UTech Classic.