Jaguars on brink of regional title 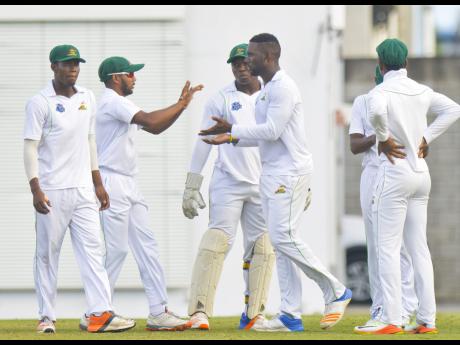 WICB Media Photo
Guyana Jaguars celebrate the fall of a wicket during the eighth round match against Barbados Pride in the WICB PCL Regional 4-Day tournament on Monday, March 27 at the Kensington Oval.

Guyana Jaguars are now the heavy favourites to win a hat-trick of titles in the Regional four-day championship, after maintaining their lead at the top of the standings despite sitting out the ninth round of matches.

Jaguars' ninth round fixture against Leeward Islands Hurricanes had to be rescheduled from last weekend, to accommodate the three-match one-day series between West Indies and Pakistan in Georgetown.

The game will now be played from April 21-24 at the Guyana National Stadium, following the completion of the final round of games next weekend.

UP TO FOURTH PLACE

In that final round, Jaguars clash with a rejuvenated Windward Islands Volcanoes, who have now won their last two games on the trot to move up to fourth on 92.8 points.

Jamaica Scorpions, meanwhile, saw their title chances slip in the last round when they produced a limp performance against Volcanoes to lose by eight wickets in Kingstown.

They lie third on 98.6 points with a difficult assignment against Pride in the final round.

Red Force, who started the last round last in the standings, revived themselves with a resounding victory over Pride are now fifth on 82 points.

They clash with Hurricanes at Warner Park, with their opponents now last on 66.4 points.