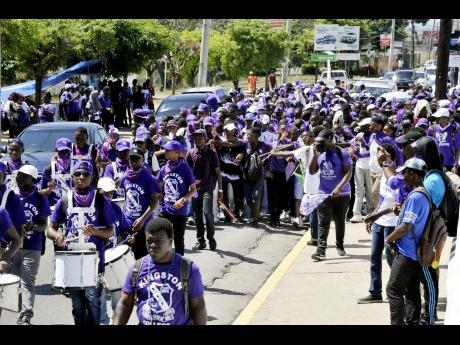 Norman Grindley
Supporters of Kingston College march along South Camp Road heading to the National Stadium to drum up support for their team yesterday.

The North Street-based institution had written a formal appeal to ISSA about Rowe's disqualification after he was adjudged to be in breach of IAAF rule 163.2b, in his seventh-place finish in the Class One boys 800m. This rule outlaws jostling for position in the race, and obstruction.

If he had not been disqualified, KC and Calabar High would have ended Champs equal on points, but the purple and whites would have won the championships based on number of events won overall.

Forbes said that IAAF's rules and guidelines have protected ISSA from further dealing with the matter, should KC decide to take it further.

"It went through the jury of appeal, and the rules are quite clear: The jury of appeal has the final say. Not even the Court of Arbitration for Sport can overturn that appeal ruling," Forbes told The Gleaner.

He said that this also means KC cannot even go to the Court of Arbitration for Sport in Lausanne, Switzerland, but should the school decide to take the matter to court, he will not try to stop them.

"KC can do whatever KC wants to do," he said. "We can't stop them from taking it to court. The rules are quite clear that it can't be overturned. The IAAF website states this. The jury of appeal is the final arbiter on the matter."

The Gleaner visited the school to speak to officials, including principal Dave Myrie and track and field head coach Neil Harrison, but were told all relevant members of staff were absent from the premises at the time. Neither Myrie nor Harrison answered subsequent phone calls.