Ronaldo gets to landmark as Madrid win 2-1 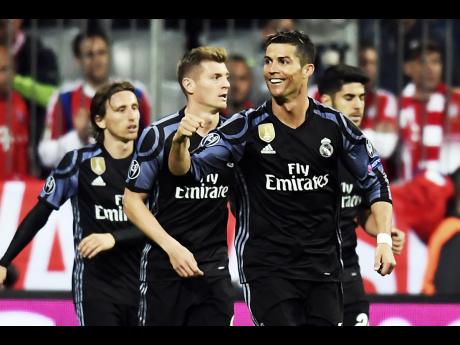 Ronaldo's second-half goals saw him become the first player to score 100 goals in European club competition. The Portuguese star ensured Madrid came from behind - after Arturo Vidal's 25th-minute header for Bayern - to put the defending champions on course to reach the semi-finals for a seventh successive year.

"We are still alive," said Bayern coach Carlo Ancelotti after losing to his former side.

Bayern were without club top-scorer Robert Lewandowski after he failed to recover from a knock to his right shoulder. But they had not been beaten at home in the competition since April 2014, when they lost 4-0 to Ancelotti's Madrid in the semi-finals.

Ancelotti's successor at Madrid, Zinedine Zidane, is bidding to become the first coach to lead a side to back-to-back titles in the Champions League era.

Bayern should have been 2-0 up at the break, but Vidal sent his penalty well over the bar after Dani Carvajal was adjudged to have handled the ball. The Madrid defender was booked though TV replays showed Ribery's shot had hit his upper body.