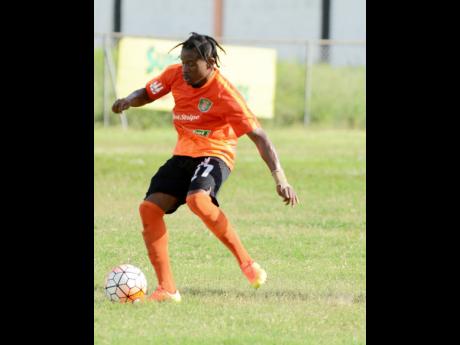 Elton Thompson is still celebrating after he fired in the first hat-trick of the season to carry Tivoli Gardens to a 3-0 win over Arnett Gardens in the Red Stripe Premier League (RSPL) game at the Edward Seaga Complex yesterday.

Thompson, who missed the last four RSPL games due to injury, broke the deadlock after 23 minutes when he fired past Omarley Francis from the top of the area.

The speedy striker made it 2-0 seven minutes after the interval when he stole possession and raced away to slip the ball past Francis. Ten minutes later, the pint-size striker sealed his triple when he outsped his marker and fired under Francis.

"To get the first hat-trick of the season, I'm overwhelmed," Thompson told The Gleaner afterwards. "The feeling I have, I can't even explain. After I scored the last one, I didn't even know where I was, I just feel happy, joyful," he said.

HAD TO STEP UP

With top scorer Germaine Johnson out with a hamstring strain, Thompson said he had to step up.

"I was out the last four matches due to injury. My team was going down (the table), so I had to come back from injury because we needed this one, and I came back and did it, and Father God helped me to do this one," he added.

Thompson's tally for the season is now eleven and puts him third behind teammate Johnson (16) and Boys' Town's Shamar Nicholson with 13.

Meanwhile, the $1-million bounty is still up for grabs going into Sunday's final round of games, after leaders UWI (59) played to a 0-0 draw with Montego Bay United and second place Humble Lion (58) were held to the same score by Maverley/Hughenden.