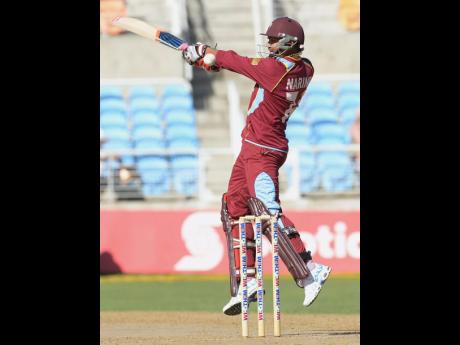 KOLKATA, India, CMC – Sunil Narine excelled with a cameo at the top of the order as Kolkata Knight Riders chased down a challenging total to beat Kings XI Punjab by eight wickets in the Indian Premier League here yesterday.

Playing at Eden Gardens, Kings XI posted 170 for nine off their 20 overs and KKR overhauled the target in style, with 21 balls to spare to move to the top of the standings on net run rate.

Captain Gautam Gambhir top-scored with an unbeaten 72 from 49 deliveries, posting 76 for the first wicket with Narine who smashed an entertaining 37 off  18 deliveries.

First used in the opening role for Melbourne Renegades during the last Australia Big Bash, the left-handed Narine thumped four fours and three sixes in an a partnership that required a mere 34 balls.

He took a particular liking to fast bowler Varun Aaron who he belted for back-to-back sixes and then a boundary in the sixth over before succumbing to the fourth delivery, caught at deep mid-wicket off a mis-directed pull.

Gambhir, who counted 11 fours, then added 40 for the second wicket with Robin Uthappa (26) before putting on a further 55 in an unbroken third wicket partnership with Manish Pandey (25 not out).

Earlier, off-spinner Narine proved superb with one for 19 in a miserly four-over spell as Kings XI struggled to get going after being sent in.

Fast bowler Umesh Yadav was the leading bowler with four for 33.

David Miller and opener Manan Vohra both top-scored with 28.