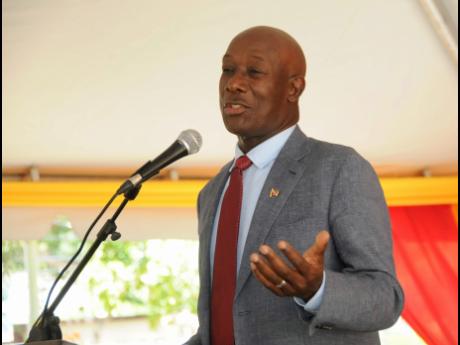 PORT OF SPAIN, Trinidad, CMC – Trinidad and Tobago Prime Minister Dr Keith Rowley has accused a small leadership clique of “hijacking” West Indies cricket and argues that unless fundamental changes are made in the area of governance, the region will continue to languish behind the rest of the cricketing world.

The outspoken regional leader, who in the past has been critical of the West Indies Cricket Board’s management of the sport, said the issue of ownership also remained a critical issue in the resolution of the crisis facing the game in the Caribbean.

“Caribbean cricket has been hijacked by a small clique of people who are hell bent on destroying Caribbean cricket and my position [is], unless the question is answered as to who owns that asset, we’re spinning top in mud,” Rowley told morning television show in his home country.

“We’re being told in the West Indies – and I was told to my face along with my colleague the Prime Minister of Grenada [Dr Keith Mitchell] that you (CARICOM) have no say in this. This is West Indies Cricket Inc. and it is their shareholders they have to please.”
He added: “I don’t know who the shareholders are but what I do know, is that unless there are drastic changes to the current arrangements, West Indies cricket will never get back where we expect it to be.”

West Indies cricket has been in the doldrums for nearly two decades now, plagued by poor results on the field and player tensions with the WICB, and occasionally player strikes.

The Test team currently sits in the nether regions of the international rankings at number eight while the one-day team is ninth, behind sides like Bangladesh and Pakistan.

With the game immersed in conflict, a Governance Review Panel chaired by UWI Cave Hill principal, Professor Eudine Barriteau and commissioned by regional nation grouping, CARICOM, recommended the “immediate dissolution” of the WICB in a 2015 report, arguing the body’s governance structure was “obsolete” and “anachronistic”.

The report called for the “appointment of an interim board whose structure and composition will be radically different from the now proven, obsolete governance framework.”

However, the WICB was quick to reject the report, labelling the proposal as an “unnecessary and intrusive demand.

Since then, CARICOM and the WICB have remained at odds over the way forward.

Rowley pointed out that the decline of Caribbean cricket was underscored by the state of first class cricket, which has ceased to be attractive to the public.