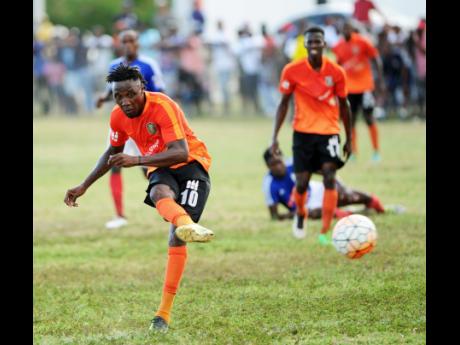 Tivoli Gardens star frontman, Jermaine 'Teddy' Johnson, is hoping to be ready for the Red Stripe Premier League play-offs after being sidelined by a hamstring strain he picked up in the team's Jackie Bell  KO semi-final on Sunday.

Johnson has been told by doctors that he needs at least two weeks rest before he can resume training but the veteran striker says he could be back on the field as early as next Wednesday.

"The doctors say it's two weeks minimum but I am still watching it. Hopefully by next Sunday I can be back and I hope that by Wednesday I can start running," he said.

"You always want to go out and play for your team and play for yourself. You are leading in goals so you miss the goals and the team will miss your goals ... and seeing the players out there makes you kind of sad but you just have to motivate them off the field," he added.

Tivoli are third in the table with 55 points behind UWI (59) and Humble Lion (58) and although finishing second is a bit far-fetched at the moment he hopes other results can go their way.

He also commended coach Damion Gordon for the job he has done in Omar Edwards' absence.
"It's a killer not having your first team coach. But Damion is doing really well and he's learning a lot, and the players want to play for him, He is a Tivoli man (former player) so everyone listens to him and play for him," he added..