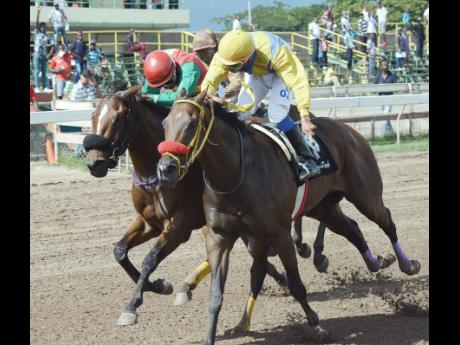 DALTON SIRJUE's GARY GLITTER has the distance and handicaps in his favour against CRUCIAL APPEAL in this afternoon's 1300-metre open allowance, a rematch between the two sprinters in a sharp 10-horse field.

CRUCIAL APPEAL returned off a three-month lay-up, down in class, among overnight allowance horses on March 4 and accepted a gift with open arms.

The seven-year-old chestnut speedster sat off the pace with Dane Nelson, behind speedy SIR BUDGET, and changed gears on GARY GLITTER inside the last half-furlong to win going away by two-and-a-half lengths.

GARY GLITTER was in CRUCIAL APPEAL's backyard that afternoon and was forced to keep pace with his faster rival while chasing SIR BUDGET in splits of 22.3, 33.0 and 44.3 after being slowly into stride, leaving him with no final kick.

However, the table has turned somewhat with the rematch now being on the round course, going a furlong-and-a-half longer and four-year-old GARY GLITTER seven pounds lighter after sharing topweight 57.0 kilos with CRUCIAL APPEAL when they last met.3

Though CRUCIAL APPEAL is still a formidable foe on the round, GARY GLITTER should get some help from TALENTED TONY K, who only knows to run from in front and should ensure an honest pace to, at least, the home turn.

One of the most improved horses in training since the back end of last season, GARY GLITTER returned after his loss to CRUCIAL APPEAL with a scintillating race in the grade one Lady Geeta Trophy two weeks ago.

Carrying 50.5 kilos and partnered by sparingly used Chalrick Budhai, GARY GLITTER zipped to the lead in the 1100-metre race with CAMPESINO and SEEKING MY DREAM in chase.

GARY GLITTER went down by a length and a half to CAMPESINO, last year's Caribbean Sprint champion, not to mention that Horse of the Year SEEKING MY DREAM was outsped and finished a length behind him, albeit with 57.0 kilos.

That performance signals danger for CRUCIAL APPEAL, who, at his best, could be tough to beat up to six furlongs. However, with TALENTED TONY K in the race, he will be under pressure to stave off GARY GLITTER, partnered by regular rider Rayan Wilson replacing Budhai.