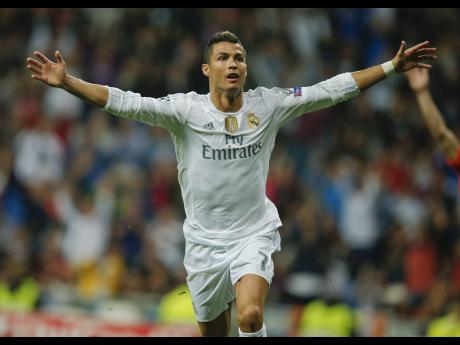 Real Madrid will have to continue their march towards their first Spanish league title in five years today without scoring trio Cristiano Ronaldo, Karim Benzema, and Gareth Bale.

While Ronaldo and Benzema, along with goalkeeper Keylor Navas, will rest when Madrid visit Sporting Gijon, coach Zinedine Zidane said yesterday that an unidentified leg injury will keep Bale from playing.

"We'll have to see what his injury is," Zidane said. "He has some swelling to his soleus. It's a muscular issue on the area he was operated on."

Bale underwent surgery on his right ankle at the end of November, sidelining him until he made a return as a substitute against Espanyol on February 18.

Bale scored late to seal that 2-0 win over Espanyol, and two games later he struck again to start a 3-2 fightback at Villarreal.

SCORELESS FOR A WHILE

But since then, he has been scoreless in six matches, including a 2-1 win at Bayern Munich in the Champions League on Wednesday when Cristiano Ronaldo netted both of Madrid's goals.

Bale has seven goals for Madrid in this campaign. Zidane said he wasn't sure if Bale would be ready next week to play Bayern in the return leg of the quarter-final.

"I'm worried about it because I don't like to see players out injured and all the more so during the run-in," Zidane said. "He was excited (to play) after having spent three months out, but he knows that it's not a serious (injury), it's just a setback.

"We'll be monitoring his progress every day."

Madrid have gone a Spanish-record 53 straight games scoring at least once. They are closing in on Bayern's European record of 61 consecutive games with at least a goal, from March 2013 to April 2014.

Even playing away and without its big guns, Sporting look like easy pickings for the Liga front runner.

Sporting are in the relegation zone and five points from safety.