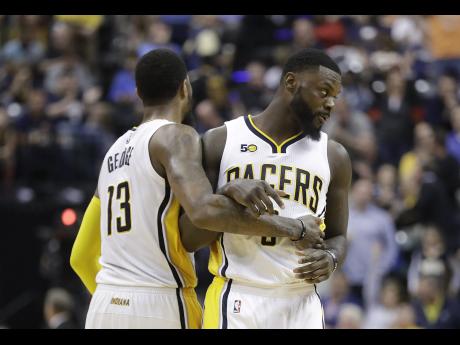 AP
Indiana Pacers' Paul George (left) and Lance Stephenson react during the second half of the team's NBA basketball game against the Atlanta Hawks, Wednesday in Indianapolis. Indiana defeated Atlanta 104-86.

In some corners, fans may scowl at the sight of a journeyman bench player creating unnecessary drama. In Indiana, it's embraced as a welcome change.

After five months of watching erratic and often uninspired play, Pacers president of basketball operations Larry Bird gambled on one of his favourite players. He believed that Stephenson's occasionally overbearing act would give the Pacers the energy boost they needed to make the play-offs.

The difference has been stunning.

"We're playing with a little bit more edge than we have all season long. I'm seeing more of a sense of urgency," coach Nate McMillan said when asked about Stephenson's impact. "More fight and toughness. We're seeing more consistency in what we're doing on both ends of the floor."

While Paul George continues to produce big numbers, Stephenson has become a force in other ways.

He's made excitement, enthusiasm and effort chic again in the locker room. He's brought panache to the defence. And the combination is a major reason the Pacers are heading to defending champion Cleveland on Saturday rather than home for the summer.

Before the 6-foot-5 guard re-signed with Indiana on March 30, the Pacers hadn't posted consecutive wins since early February as they slid from a tie for fifth in the East to the brink of elimination.

Since making his first appearance in a double-overtime loss at Cleveland on April 2, Indiana have won five straight and heads into the postseason as the hottest team in the East.

"He's different. He's the oddball and you need that," George said. "You need the guy that's energetic and live, a guy who's going to stir the pot and we work very well off of each other."

But Stephenson has learnt the hard way that his theatrics aren't for everyone - even in Indy.

During the 2014 Eastern Conference finals, he was criticised by Bird and others for trying to play mind games with LeBron James by embellishing contact, flopping and even blowing in James' ear. Indiana wound up losing the series in six games.

Over the next three years, nothing went right. Stephenson played for five different teams and went from budding star to out of the league. Things deteriorated so much that the man nicknamed 'Born Ready' was actually looking ahead to next season.

That's when Bird called with a three-year deal, an offer that brought Stephenson to tears.

"Certain teams and certain situations just don't work for certain guys," Stephenson said. "I learnt a lot from it and I'm a better person on and off the court because of it."