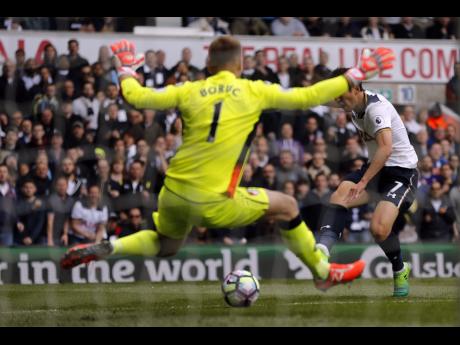 Unlike last season's title race, Tottenham know they are not on the wrong side of a popularity contest in their pursuit of Chelsea.

Leicester were the undoubted pick of the neutrals as they fought off Tottenham's challenge to improbably collect the Premier League trophy last May.

Now Tottenham occupy the role of the underdog, sitting four points behind Chelsea after swatting aside Bournemouth 4-0 yesterday.

"We expended a lot of energy fighting against Leicester, but against West Brom, against Chelsea, against the media," Tottenham manager Mauricio Pochettino said, recalling last season's late costly draws against West Bromwich Albion and Chelsea. "We fought against everyone, but now we are focusing on fighting our opponents when we play."

If Chelsea can be chased down in Spurs' remaining six games, Tottenham would be crowned champions for the first time since 1961, and etch another new name in the Premier League trophy. A triumph for Chelsea, who are at Manchester United today, would be far less enchanting, given the west London club has won the league four times since 2005.

RACKING UP THE WINS

All Tottenham can do is keep racking up the wins - yesterday's was the seventh in a row - and raising the goal-difference advantage over Chelsea in case it matters. Tottenham have a six-goal edge over Chelsea by that reckoning after another irresistible performance that produced a club-record 12th straight home win.

Even substitute Vincent Jansson managed to score his first goal from open play eight months into the misfiring striker's first Premier League campaign, wrapping up the victory in stoppage time. It was opened by Mousa Dembele scoring his first goal of the season in the 16th minute, ghosting into the penalty area unmarked to meet Christian Eriksen's corner.

Inside three minutes, Son Heung-min put the ball through goalkeeper Artur Boruc's legs for his 19th goal of the campaign to become the highest-scoring South Korean in a single European season since Cha Bum-kun for Bayer Leverkusen in 1985-86.