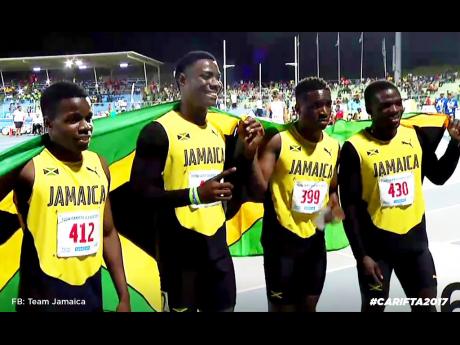 WILLEMSTAD, Curacao (CMC):
Powerhouses Jamaica tasted the bitter disappointment of disqualification while missing out on a record but compensated by shattering another mark, as they once again dominated the sprint relays on day two of the 46th CARIFTA Games in Curacao, Sunday night.

The girls Under-18 team thought they had broken their own three-year-old record of 44:80 seconds, when they brought the baton around in an exciting 44:35 seconds, to cross the line first at the Ergilio Hato Stadium.

However, the celebrations by the team of Briana Williams, Kevona Davis, Britany Anderson and Michae Harriott were cut short when it emerged they had committed a lane infringement.

They were subsequently disqualified and the Bahamas upgraded to gold in a time of 45.05 while Trinidad and Tobago took silver in 46.49 and Guadeloupe, bronze in 46.84.

However, there was no such misfortune for Jamaica’s boys in the same age group event as they stormed to a new time of 39.97 seconds to eclipse the record of 40.40 they set last year in Grenada.

Such was their dominance that anchorman Michael Stephens eased up five metres from the line but yet managed to break the old mark.

Michali Everett gave the team a great start, paving the way for Tyreke Wilson and Xavier Nairne to execute smoothly, and Stephens had the baton long before his challengers.

The Bahamas were second in 40.77 while Trinidad and Tobago clinched bronze with 40.84.

Jamaica then swept both Under-20 relays in style. In the boys, the team of Christopher Taylor, Tyreke Bryan, Jelani Walker and Delano Dunkley brought the stick around in a time of 40.10 seconds, with the only disappointment being they failed to get close to their three-year-old record of 39.38.

In the girls, the team of Kasheika Cameron, Aneka Brissett, Taqece Duggan and Tissanna Hickling stopped the clock at 44.83, to claim gold ahead of the Bahamas (46.45) and Turks and Caicos (48.85).

Jamaica’s record-breaking form continued in the girls Under-18 400 metres hurdles when Sanique Walker stormed to a new championship record of 58.95 seconds in taking gold.

The old mark of 59.50 was set by Walker’s countryman Shian Salmon last year.

Walker led a Jamaica one-two as Taffara Rose came in for the silver at 1:00.95 while Bahamian Gabrielle Gibson landed bronze in 1:01.29.

Walker’s victory headlined Jamaica’s near clean sweep of the 400m hurdles with the only abberation coming when Barbadian Rasheeme Griffith clocked 51.64 in the boys Under-18 event to turn back the Jamaican pair of Rovane Williams (51.64) and Dashinelle Dyer (53.02) who were second and third respectively.

But the Jamaicans bossed the Under-20 category with one-twos in both the girls and boys contests.

Nicolee Foster raced to 58.84 seconds in taking the line ahead of her counterpart Salmon (59.59), with Barbadian Tiana Bowen taking bronze in 1:02.80.

Ronaldo Griffiths (52.01) and Timor Barrett (52.32) then fittingly put an exclamation mark on the distance hurdles for Jamaica by finishing first and second respectively in the boys event.

Rivaldo Leacock of Barbados was good for bronze in 52.44.

The championship wraps up here Monday.