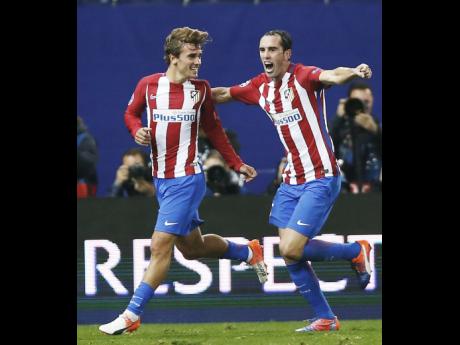 Defending champions Real Madrid will meet city rivals Atletico Madrid in the semi-finals of the Champions League in a rematch of last season's final.

The Spanish teams also met in the 2014 final, with Madrid winning both times.

The draw yesterday pitted Juventus and Monaco in the other semi-final.

Madrid will play the first game at home on May 2. Monaco will host Juventus on May 3. The return legs will be the following week.

"The goal is to reach the final, and to do that you have to beat whichever opponent you get," Atletico coach Diego Simeone said. "The goal and the motivation would be the same with any other opponent."

The Madrid clubs have faced each other in the last three Champions Leagues. Madrid also defeated Atletico in the 2015 quarter-finals.

"Every year and every game is different," said former Madrid player Emilio ButragueÒo, the club's director of institutional relations. "They will be two very intense games. Atletico never gives you anything, and we will continue to have faith in the players who have gotten us this far."

In its seventh straight semi-final, Madrid are trying to become the first team to repeat as champion since the competition's new format was created in 1992. It won a record-extending 11th title last season.

Atletico are seeking their first title. In addition to the defeats against Madrid, they also lost to Bayern Munich in the 1974 final.

The second leg against Madrid will mark the last Champions League game at the Vicente CalderÛn before Atletico moves to their new stadium.

"The best stage to bid farewell to the Calderon in the Champions League," Atletico midfielder Sa?l —Ìguez said.

Two-time champions Juventus are trying to return to the final since losing the final to Barcelona in 2015. That year, they eliminated Monaco in the quarter-finals with a 1-0 aggregate score.

"It's a tough opponent. They shouldn't be underestimated because we know how dangerous they can be," Juventus defender Stephan Lichtsteiner said. "Having seeing them up close against us two years ago when they had the same coach, I can say they play lovely football. They're very quick upfront and strong in attack.

"They don't have anything to lose and the pressure will be all on our shoulders. Their weakness could be their lack of experience, as they are a very young group. They might concede a lot of goals, but they score a lot too."

Juventus are looking for their first European title since 1996.

Monaco are in the semi-finals for the first time since they lost the 2004 final to FC Porto.

The final is in Cardiff on June 3.