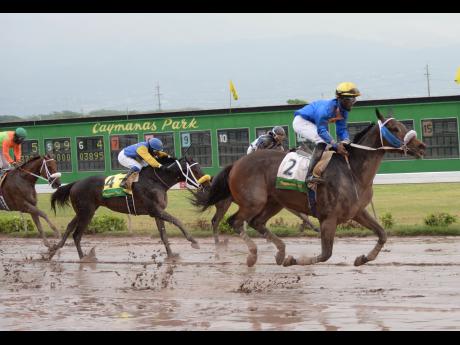 FAR-STRIDING BIGDADDYKOOL yesterday staked his claim as the country's best two-turn horse, sweeping past the trio of BRAWN, HOUDINI'S MAGIC and FRANFIELD a half-furlong out to land the Legal Light Trophy.

Out for his first race this season, the four-year-old gelding was pushed by Linton Steadman at the start of the 1820-metre event to chase FRANFIELD from the clubhouse turn and on to the backstretch.

FRANFIELD'S game plan to make all the running with Shane Ellis was foiled by BIGDADDYKOOL'S stablemate, HOUDINI'S MAGIC, who shot through at the half-mile marker.

Running 14lb lighter than FRANFIELD, HOUDINI'S MAGIC's sudden move pulled Ellis into a duel on the lead, setting up the race for the closers, BIGDADDYKOOL stalking on the outside and United States-bred BRAWN taking the shortest route along the rail.

BRAWN was first to pounce off the turn and motored to the lead along the rail. However, Bigdaddykool, who straightened four wide, hit top stride in mid-track and measured BRAWN nicely to go by a half-furlong out.

BIGDADDYKOOL lowered the stakes record by two-fifths of a second, clocking 1:55.0, erasing 1:55.2 posted by Miracle Man in 2006 and equalled by SEEKING MY DREAM in last year's race.

The big gelding, two years younger than six-year-old FRANFIELD, now looks set to dominate the route races for the remainder of the season.

They had an epic battle in last November's Superstakes, which FRANFIELD lost in the stewards' room after drifting BIGDADDYKOOL to the stands' side and narrowly lasting home.

BIGDADDYKOOL sealed a two-timer for trainer Anthony Nunes, whose OCEAN SEEKER won the fourth race with apprentice Dane Dawkins aboard.

Jockey Aaron Chatrie rode two winners to top his peers. He opened his account with 8-1 outsider BRAVE HEART, who was awarded the second event after 2-1 chance BREEZY was disqualified for repeatedly hindering MOUNT ZION KING in the stretch run.

Chatrie closed his two-timer with BOUNCE, who took charge of the 1500-metre fifth event from three furlongs out.

Racing continues at Caymanas Park on Wednesday. Next Saturday, the Jamaica Oaks headlines weekend racing with 1000 Guineas winner SHE'S A MANEATER listed among 20 entries for the $3m 10-furlong race.