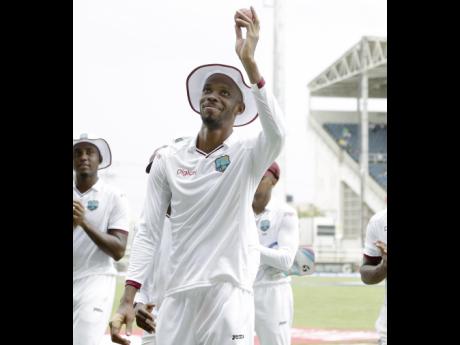 West Indies all-rounder Roston Chase has revealed his love for Sabina Park following a face-saving half-century on the opening day of the 50th Test match at the historic venue here Friday.

Chase struck 63, including seven boundaries and a huge straight six as West Indies closed on 244 for seven after rallying from a dire position of 71 for five in the first over after lunch.

Last year, Chase wrote his name in the history books with a maiden Test century and five-wicket haul against India in his second Test at the same venue against India.

"There was a time when I didn't really enjoy playing here (at Sabina Park), but I have grown to love the ground a lot. I did well here against India last year, and knew I had to dig in today after we were in big trouble after lunch," Chase said following the day's play. "I think it's the way the Jamaica crowd really gets behind you that I like the most."

Chase added a record 118 for the sixth wicket with keeper Shane Dowrich, who made 56 off 130 balls with nine fours. The pair came together after opener Kieran Powell perished after lunch. They kept the Pakistanis at bay until after tea, when Chase fell to a stupendous catch at long off by Wahab Riaz.