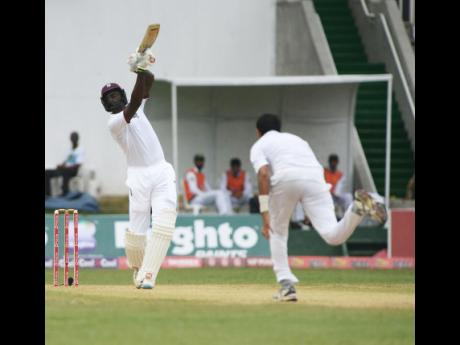 Ian Allen
Jason Holder hitting a six to bring up his 50 at Sabina Park yesterday. 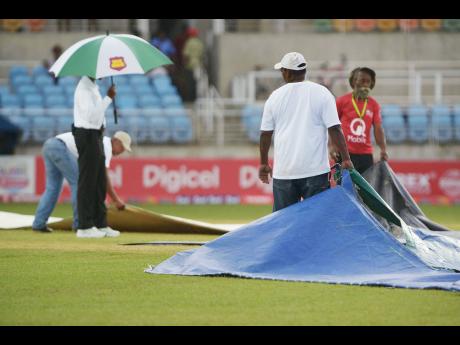 Ian Allen
Grounds men at Sabina Park rush to cover the pitch yesterday as the rains came down on the second day of the first Test match between the West Indies and Pakistan.
1
2

Solid batting from West Indies captain and all-rounder Jason Holder has given the West Indies a realistic shot of posting over 300 runs in the first innings of their Brighto Paints-Q Mobile Cup first Test against Pakistan at Sabina Park.

Resuming on 30 not out yesterday and eyeing his fifth half-century to go along with his sole ton in 21 Tests, Holder ended unbeaten on 55, as the West Indies, who ended with 244 for seven on day one, closed day two on 278 for nine.

A wet pitch caused by seepage under the covers delayed the game until well after lunch. It is unclear as to what may have caused the water seepage. However, the grounds staff did what they could to dry what turned out to be a wet patch on the pitch, including the burning of charcoal on a sheet of zinc.

There was also a brief downpour shortly after the scheduled lunch break, which further delayed the start until 2 10 p.m.

When play started, the West Indies virtually picked up where they left off on day one with Holder and his overnight partner, Devendra Bishoo, adding another 20 runs to their overnight partnership of 55.

Bishoo, in eyeing his first half-century in Test, or even bettering his highest score of 45 from 21 appearances, failed to achieve either after he was caught behind off the bowling of the superbly impressive, fast bowler Mohammad Amir, for 28.

Holder was then joined by young fast bowler Alzarri Joseph. He, however, after facing six balls, was dismissed without scoring, bowled by a well-directed in-swinger from Amir.

Fast bowler Shannon Gabriel, who is not out four, joined Holder and together they navigated 1.4 overs before the rains returned at 3 30 p.m. to effectively end the day's play.

Play, which was being assisted by the use of flood lights, was eventually officially called off at 4 30 p.m.

Holder, who brought up his 50 with an elegant straight hit for six off the bowling of fast bowler Mohammad Abbas, has so far slammed seven fours and two sixes.

Amir, 25, who served a ban from international cricket for match-fixing in a Test match in 2010, ended the day with five for 41 off 24.3 overs - his first five-wicket haul since returning to the game last year.

A. Joseph b Mohammed Amir 0

S. Gabriel not out 4