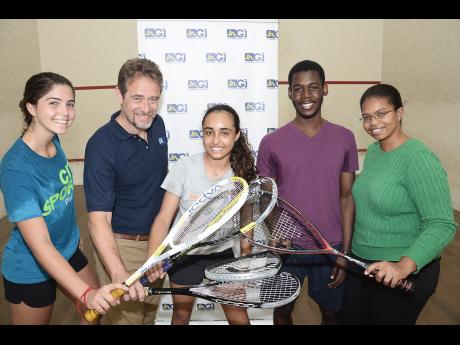 JN General Insurance (JNGI) has stepped up its support for local squash and will serve as title sponsors of the 2017 All-Jamaica Squash Championships scheduled for tomorrow to Friday at the Liguanea Club in Kingston.

Expectations are high for the prestigious tournament as it will mark the return of squash queen Karen Anderson and the continuation of the growing rivalry between reigning men's champion and top seed Chris Binnie and his nemesis, Lewis Walters, currently ranked number two.

With six national and seven regional titles under his belt, Binnie has a date with history as he seeks to extend his streak. However, Walters will be looking to blot Binnie's record and win his first national title. The arch-rivals and top regional players last went head to head in the finals of the Caribbean Championships in 2016. Binnie emerged as the victor on that occasion but Walters will be going all out to ensure history does not repeat itself.

At the same time, the number 3 seed, Bruce Burrowes, could crash the party with his legendary determination and stamina. Also in the mix is former Junior Caribbean Champion, Julian Morrison, who recently joined both Binnie and Walters on the Professional Squash Association circuit, and has the potential to cause trouble for the more experienced players.

In the ladies' draw, there is considerable excitement as Anderson, who holds the record with 12 titles, will be looking to raise the trophy for the 13th time. Standing in her way is Barbadian starlet Alex Jordan, who may well steal the crown. In addition, red-hot junior national team players Mia Lake and Mia Mahfood will add their brand of spice to the ladies' competition as they seek to move to the next level.

"With a slate of top players and the excitement of all the rivalries, we know that this will be a thrilling All-Jamaica Squash Champs and, as supporters of local squash, we are delighted to be part of this year's tournament," he said.

"We couldn't be more excited about this year's championships as it will showcase the skills of our current top players, the potential of our juniors and the enduring strength of our veterans," Jamaica Squash Association secretary Gill Binnie said.