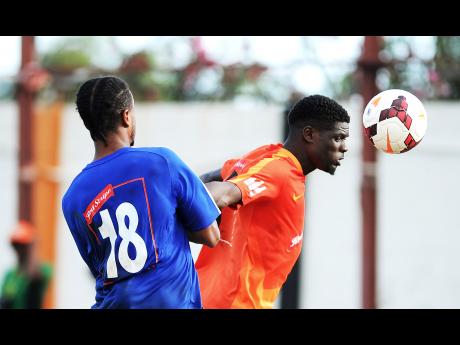 Portmore almost achieved the improbable last season by moving straight from promotion to champions, but were stopped in the final by the most consistent team over the past four years, Montego Bay United. For coach Linval Dixon, last year's shortfall has been a major motivator heading into this season.

"Our intention is to do one better than last year. If this (play-off) is the route we have to go, then that is it," said Dixon.

"We are ready to go out there and fight for what we want. We know it will be a wet field, but we are equipped and ready to go," he added.

His team's preparations, he said, were slightly affected by rain over the past few days, but should not be a major factor.

'Things and our chances are looking good. The team is ready. We have no injury worries. The weather would have dampened our preparations heading into the weekend but that is nothing major.

"In fact, our major challenge right now is to select the right starting eleven as they are all fighting for a starting position. In saying this, I am not trying to take anything away from Tivoli Gardens as they are a tough, hard-fighting team which cannot be taken for granted, but all our players are motivated and ready to go," the former national player said.

Among the players Dixon will have to choose from are Tramaine Stewart, Ricardo Morris, Ewan Grandison, Damono Solomon, Malique Foster and Michael Binns.

Tivoli Gardens, on their hand, could possibly be without two of their biggest weapons. The competition's leading goal scorer, Jermaine Johnson, has been nursing a hamstring injury and has been ruled out, according to manager Brian Rose, who added that fellow injured attacker Elton Thompson only has a 50 per cent chance of playing.

"Teddy will definitely be out with the hamstring injury. Elton has a 50 per cent chance of playing, so that is the situation we have now, but we are not worried," Rose told the Sunday Gleaner.

"His absence says a lot. He has scored 16 goals this season and this speaks volumes for our attacking force as Elton was our next leading scorer, so this cannot be downplayed. Add to that the fact that he is an inspiration for the team and a leader on the field,

"What I can tell you, though, is the same thing I have said to them. If they come out with the same mindset and approach as they did for the Jackie Bell Knockout, then we are definitely in with a big chance," explained Rose.

One of the players who came up big for Tivoli Gardens in the Jackie Bell Knockout was the confident Junior McGregor, who had a double in their 3-0 win over Cavalier.

"All the players know that they will have to step up. Not only are we facing tougher opposition, but at least one key player will be missing, so they will have to give more. Home advantage will be important and this is something that we have to capitalise on in order for us to go into the return leg with a lead," a hopeful Rose said.