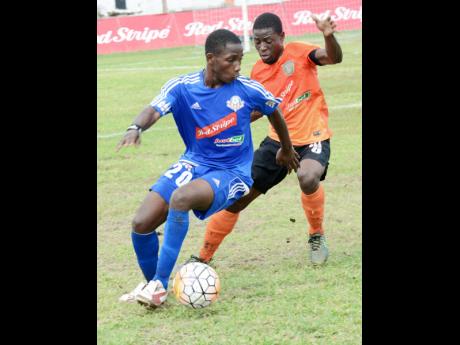 Portmore United's coach, Linval Dixon, said that the absence of an ambulance for their Red Stripe Premier League (RSPL) quarter-final against host Tivoli Gardens, which ended 1-1, at the Edward Seaga Complex yesterday, was a big disappointment.

Thirteen minutes into the game, Tivoli's Romaine Breakenridge was shown a red card and had to be taken to hospital after a nasty challenge on Portmore's Henrico Ricketts, who came out the worse from the collision with a bloody face and at one point appeared to be unconscious.

Both players were taken to hospital but had to be transported by regular vehicles.

Reports from the Portmore camp are that Ricketts received several stitches and a prescription before being released, but Dixon was clearly disappointed by the situation and is hoping that better medical facilitation will be made for the remaining games.

"This is the quarter-final and you need to have an ambulance in case anything major happens, and we fell short in that regard," Dixon said afterwards. "The home team or competition must be responsible for this (medical). To have no medical people around for a game like this was really disappointing."

Meanwhile, second-half substitute Howard Morris was the hero for 10-man Tivoli Gardens as his late strike earned the host a precious 1-1 draw going into next week's return leg, which will be played at the Anthony Spaulding Sports Complex.

Two minutes after Breakenridge's sending off, Portmore United made the most of the numerical advantage as Javon East fired home to give Portmore a 1-0 lead going into the break after dancing his way around three defenders inside the penalty box before comfortably slotting home.

After the interval, Portmore United continued to create chances with two great opportunities falling to Malique Foster and East, but neither could convert and send the contest to bed. Tivoli, on the other hand, struggled to create any meaningful chances despite several determined attempts to push forward and gain parity.

Coach Damion Gordon, who was growing increasingly frustrated, introduced the former Hydel man, Morris, with over 20 minutes to go, and he hardly put a foot wrong, playing some excellent passes and showing good ball-handling skills throughout his time on the field.

However, not many Tivoli Gardens fans expected the 20-year-old to deliver the sort of magic he brought with his right foot, but he brought the house down with a spectacular goal four minutes from time to set up a tantalising second leg.

The tricky player received the ball just outside the penalty area on the right hand side and swivelled past his marker before unleashing a fierce shot into the top corner in true prime-time fashion.

"As players, we come to show Portmore that we can be competitive. When I kicked the ball and it scored, I ran over to my fans and told them not to worry because Jermaine and Elton are injured and when they come back next week, it is going to be an easy win for us," Morris stated afterwards.

He added that Portmore played a physical game but that their ball-playing skills prevailed.

"Portmore came hard, but we showed them that it is not about being physical. It's about ball work, and we just kept the ball moving until we got the goal," he added.