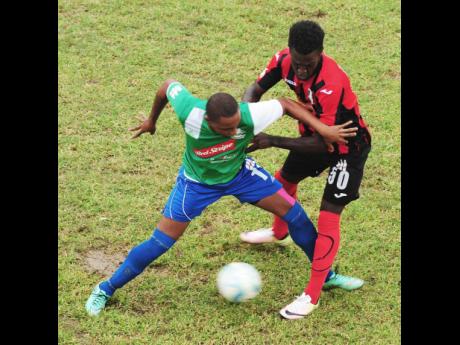 Fans could be in for a mouth-watering Red Stripe Premier League (RSPL) clash this evening when the champions of the past two seasons meet at the Anthony Spaulding Sports Complex and, fittingly, under lights this evening.

In 2015, coach Jerome Waite satisfied the thirst for championship from the Arnett Gardens faithful when he led the club to a convincing win over then defending champions Montego Bay United. Last year, Montego Bay United avenged that defeat by putting Arnett Gardens out of the competition in the semi-final round. This year, both teams come head-to-head in the quarter-final off a restructured competition, and only one can advance.

"We are prepared for a tough game against them. They defeated us one year in the final, and we avenged that last year by knocking them out in the semi-final. So this is a big game for both of us. It is like a grudge match," Orville Powell, president of Montego Bay United, said ahead of today's game.

Powell, whose team had an indifferent run following its participation in the Caribbean Football Union Champions League, where they played a number of matches in quick succession, conceded that there were some injury worries but posited that they would be up to the task.

"The team has been training in preparation for this game. The final training was this morning, and we are pretty positive. We intend to play our normal game and intend to get a positive result and return to Montego Bay for the second leg, where we will take care of business," Powell said.

Arnett Gardens' Waite was just as positive, if not more so than Powell.

"We want to settle it from early to make sure we are in command, and we are targeting two or three goals," said Waite, who rested a number of his key players in their last two regular-season games.

Added Waite: "We are ready and looking forward to the game. Vishinul Harris is up and going, Oneil Thompson is fit and ready, Ranike Anderson is raring to go.

"The vibes are good all round. Everyone is looking forward to the game. The only issue is that it is only 11 players who can start and three substitutes, so that is our only challenge, and even if we have injuries, we have adequate replacements," the confident Waite explained.

Besides the names mentioned above, Waite will be looking to the likes of Newton Sterling. Kemal Malcolm, and the veteran Leon Strickland.

Whenever Dino Williams is at his best, Montego Bay United is unstoppable especially when Owayne Gordon and Allan Ottey offer support. Add to that group the hungry Donovan Carey and Jermain Woozencroft, and Montego Bay United will be a big threat.