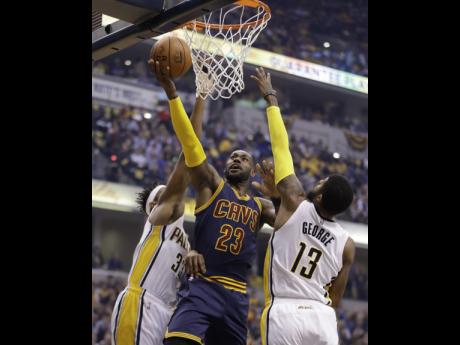 Darron Cummings
Cleveland Cavaliers' LeBron James (23) shoots against Indiana Pacers' Paul George (13) and Myles Turner during the first half in Game 4 of a first-round NBA basketball play-off series yesterday. The Cavaliers won 106 - 102 to clinch the series.

LeBron James made a 3-pointer with 68 seconds left yesterday and the Cleveland Cavaliers hung on for a 106-102 series-clinching victory at Indiana.

James finished with 33 points and 10 rebounds as he became the first player under the current play-off format to win 21 straight first-round games. He also set a league record with his 10th career play-off sweep.

But James answered with the go-ahead 3-pointer and Cleveland sealed the win on James' free throw with 1 second left.

Lance Stephenson scored 22 points and Paul George added 15, but missed a 3-pointer that could have forced overtime in the closing seconds. It's the first time the Pacers have lost a series 4-0 in their NBA history.

Kyrie Irving added 28 points for the Cavs, who await the winner of the Bucks-Raptors series.

Indiana got back into the game with a 7-0 spurt early in the in the fourth, then methodically continued chipping away at the lead until Thaddeus Young tied the score at 100 with a short jumper and broke the tie on a tip-in with 1:31 left.

But James, whose teams were 51-0 when starting the fourth quarter with double-digit leads in the postseason, made sure the perfect record remained intact.

Cleveland has won seven straight play-off games overall and 11 straight in the first round since James returned to his hometown team.

It was another milestone day for James, who moved past Michael Cooper, Magic Johnson and James Worthy on the league's list of consecutive first-round wins, and past Tim Duncan for most career sweeps, according to Elias Sports Bureau.

James also went 13 off 25 from the field, tying Kobe Bryant for fourth on the career play-off list for field goals. Each have 2,014 baskets.

Indiana has lost five straight postseason games and six of its last eight.