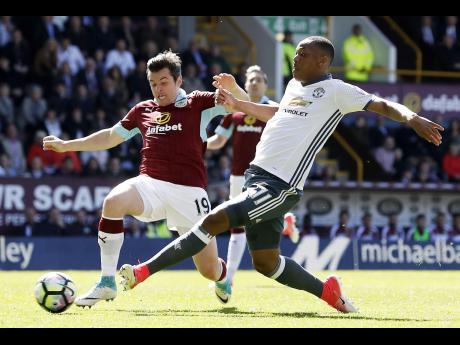 Anthony Martial and Wayne Rooney made the most of rare starts by scoring first-half goals in Manchester United's 2-0 win at Burnley in the Premier League yesterday, lifting the team to within a point of the Champions League qualification positions.

With Zlatan Ibrahimovic injured and Marcus Rashford rested, Martial started as the centre forward and opened the scoring in the 21st minute at Turf Moor after exchanging passes with Ander Herrera on a quick counterattack.

Rooney, playing on the left wing for only his third appearance in two and a half months, scored United's second goal - with the aid of a slight deflection - from close range in the 39th after Martial had a shot saved.

United stayed in fifth place but are now a point behind fourth-placed Manchester City, with the cross-town rivals meeting in an eagerly anticipated derby match at City's Etihad Stadium on Thursday.

Unbeaten in the league in 23 matches, United will go into the derby with confidence and with options in attack in the absence of Ibrahimovic, who sustained a serious knee-ligament injury in the Europa League match against Anderlecht on Thursday.

Rashford played 120 minutes against Anderlecht, so Jose Mourinho began with the 19-year-old striker on the bench and handed a start to Martial, days after the United manager warned the France international that he wanted to see an improvement in his attitude.

Martial impressed with his movement and work rate, while his goal is set to cost United €10 million owing to a reported clause in his contract that says Monaco is owed that sum if Martial reaches 25 competitive goals for the English club. Martial moved to United for an initial £36 million (then US$55.5 million) in September 2015.

Burnley have one of the strongest home records in the league and Mourinho made eight changes to the team that beat Anderlecht 2-1, making the prospect of an upset somewhat likelier.

United - in the middle of a grueling run of games domestically and in Europe - coped well in the circumstances and avenged a frustrating 0-0 draw at Old Trafford in the first game between the teams, when United had 37 shots at goal but couldn't beat Burnley goalkeeper Tom Heaton.